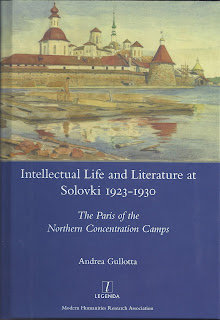 At his 1926 trial, the fascist prosecutor of Antonio Gramsci, leader of the Italian Communist party, famously declared “For twenty years we must stop this brain from working”. So Gramsci was sent to a fascist prison where he was supplied with pen and notebooks and a censor who duly stamped each page of what became the Prison Notebooks and Gramsci’s claim to enduring intellectual fame.

You can take this well-known story as evidence for many things, including the claim that totalitarianisms never quite succeed in controlling the human element – down the line, there will always be someone too lazy, too drunk, too bribeable, or too tinged with humanity to apply the full rigour of the law and who for an extended period of time may simply do things the way they see fit, until some interfering busy-body calls them to order.

In the early 1920s, Russia’s Soviet regime began to organise prisons and camps for the many opponents – real or imaginary - who for one reason or another were not simply shot on the spot. There was already to hand an Imperial model which involved sending prisoners far away from the principal cities and into remote and inhospitable areas – the east and the north. Russia is a very big place (look at the map) and you really did not need to bother with walls in places so remote that escape was hardly realistic (though, as always, there were escapees who lived to tell the tale).

The Solovetsky islands in the White Sea of the Arctic north west of Russia had been used before for this purpose, and the Soviets decided to use them again. There were already many buildings in place since the islands had for centuries housed Russian Orthodox monasteries. With an infrastructure already in place, it was a no brainer as somewhere to send people you wanted well out of the way. Out of sight and, as a side-effect, out of mind.

Largely as a matter of policy, Solovki became the place to which the Bolsheviks consigned opponents who claimed to be socialists themselves and, more generally, troublesome intellectuals – poets (a large occupational group in Russia), philosophers, theatre actors and directors (another large group), priests and theologians, natural scientists. Many of these did not claim to be socialists at all. Ordinary, uneducated trouble-makers were also sent to Solovki too but from Gullotta’s book I don’t get a clear sense of the relative sizes of the different groups or how the relative proportions shifted over time.

What is clear is that the Solovki camp admininstrators, and regardless of what Moscow may have had in mind, decided that the simplest way to organise the camp was to allow some of the intellectuals to go on being intellectuals, fully exempt from manual work, and to assign the manual work – principally, logging in the forests - mostly to those who were used to manual labour. The intellectuals were allowed not only pen and notebooks but a library, a theatre, a printing press, time and places to discuss and debate. They kept themselves very busy and the censors couldn’t keep up even when they wanted to (which was not always). So there is a large literary legacy from the Solovki camp – a camp which Solzhenitsyn called “the mother of the Gulag”.

All this happened in a context where it was also possible to fall foul of some guard or other and end up out with the loggers, or in the punishment block, and possibly dead.

Gullotta’s scholarly, in-depth but quite readable book primarily examines the content of the printed output of work from Solovki in the early period 1923-30 and also considers the circumstances of it production, including the constantly shifting and always ambivalent relations between prisoners and camp administration.

I think there is a very simple point which can be made, that prison administrators and guards feel that it enhances their status if they are in charge of high-status prisoners. In non-totalitarian regimes, it is a commonplace that celebrity prisoners – prisoners whose crimes have been all over the newspapers – get better treatment than those who are not notorious. They find it much easier to work the system to their advantage. On Solovki, the intellectuals made life more interesting for the camp officials. It is not unimportant that some of the intellectuals knew how to make camp administrators laugh. Gullotta singles out Iurii Kazarnovskii, "the only satirical writer in the SLON camp who was appreciated by the camp administration" (page 246). (Even in the camps of Nazi Germany, humour could achieve things which other methods could not).

The printed literary output of Solovki appears from Gullotta’s book to be well-preserved and well-studied. There was also other written output, as I discovered by chance a few years ago. Prisoners did have right of correspondence, both inwards and outwards. There was a post office on the islands which Gullotta illustrates (see below): 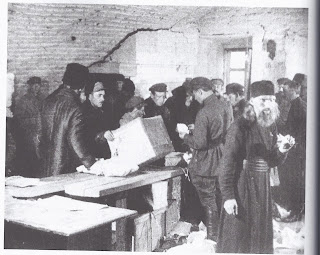 The camp printing press produced picture postcards with views of the islands and these were sold to prisoners who clearly had money. Money is important in prison camps; in totalitarian systems, it is one of the perks of being a guard that people – both inside and outside the camp -  will offer you bribes.

Some of the postcards are photographic, others were based on paintings and sketches by the well-known artist Osip Braz, best known for a portrait of Chekhov which now adorns many paperback covers, and who spent two years on Solovki (1924 – 26). Here is an example of Braz’s work in my possession; the card was printed on the press of the camp administration (USLON) in an edition of 1000: 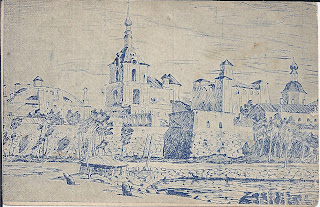 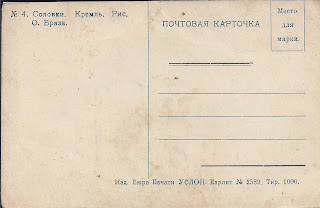 Prisoners wrote home on these cards, which were carried to the mainland at Kem and then passed through the regular mail. They were censored before leaving the islands but in a fairly perfunctory way – on the card shown below, the censor’s mark is simply the blue-pencil initials scrawled over the message. 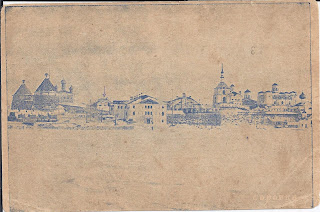 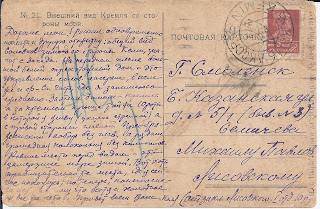 The writer, a prisoner called Lisovsky writing to a family member in Smolensk, describes the card’s panoramic view, singling out the white house in the centre which houses the camp administration and where he works or studies every day in the accounting department. He identifies the Kremlin on the left of the card and in between he has arrowed the 10th company barrack where he lives. On the right, he identifies the Preobrazhensky cathedral with its bell tower “without bells”. In front of it all is the frozen sea. “Now you see where I am”.