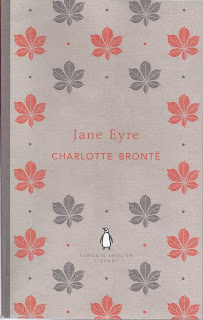 I read this over a weekend when many of my fellow Ruritanians (and dare I say, most of them female) were transfixed by the wedding of Meghan Markle and Harry Wales(or Mountbatten-Windsor, I'm not sure which is correct). That piece of live costume drama was but one more on-schedule production from the House of Windsor, the latest addition to our Ruritanian cultural world which fills the leisure hours of its subjects with sit coms, rom coms, and costume dramas heavily dependent on out-of-copyright Victorian triple-decker novels, like the one I was reading while others were viewing a marriage made in Hollywood.

Jane Eyre gives us the phrase Reader, I married him - in my edition, you wait until page 544 to get that.

There must come a time, even in demented Ruritania, and perhaps even within the next hundred years, when all but a few antiquarians tire of nearly all these Victorian novels, at least in their original written form. The accomplished descriptions of nature, the carefully painted human physiognomies, the long set-piece speeches, the heavy stamp of moral rectitude, all of which fatten up the volumes, will cease to charm. The books just go on for so long. People will settle for adaptations which play fast and loose with the originals. The story of Jane Eyre and Mr Rochester cut down would do nicely for an overwrought opera, the arias and duets set against a background of a very energetically pumped wind machine. The madwoman in the attic could be filmically Gothed-up to the nth  degree and still legitimately claim fidelity to the original.

Even now, these triple-deckers are no longer read and studied for literary merits which may in any case often strike one as limited (Jane Eyre does go on and on and on). They are read now for the scope they provide for ideological contestation. You can be of the party of Jane, the party of Mr Rochester, the party of the madwoman in the attic, even I suppose the party of Rosamund Oliver, though not the party of St. John. Indeed, confronted by St. John’s attempts to induce Jane to marry him, there can scarce have been a modern reader who has sat through it without mounting anxiety    (literary merit there) and a desire to shout for the whole valley to hear Tell him to fuck off! (and there). What Victorian readers exclaimed, I have no idea, but clearly many felt the same way. That is part of the novel’s achievement, though it would be hard not to be persuaded against a St. John who is capable of saying things like this, "As a conductress of Indian schools, and a helper amongst Indian women, your assistance will be to me invaluable" ( p 488). But when St John goes off from her rejection saying "that he had nothing to forgive" (p 495), Jane comes out with a startling sentence, "I would much rather he had knocked me down" (p 495) which  jumps out from the page to close a chapter.

Nowadays, you are already free to read the novel as anachronistically as you like; no one is going to stop you annexing it to some favoured cause though most of them will be marked Feminist and given good grades accordingly. However, the essay by Elaine Showalter which closes the edition I have read is really very weak; it is not so much a structured piece of criticism, feminist or otherwise, as a rather random (and even desperate) assembly of remarks pointing off in wildly different directions. Most notably, it does not engage with the core of what the book is “about”: the development of the relationship between Jane and Mr Rochester in which both change and develop so that Jane becomes less priggish and prudish (at the end, she is even the coquette sitting on Rochester’s lap, teasing him) and a chastened  Rochester sheds the vanity of seeking to refashion Jane outwardly into a bejewelled vision fit for a sultan’s eye.