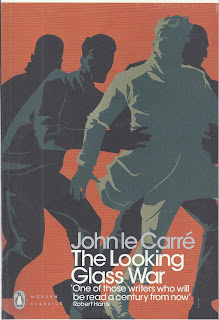 This novel was first published in 1965 and the publishers call it “The Fourth George Smiley Novel” though Smiley is really rather peripheral. What is central is an extended tale of bureaucratic bungling, of rigid incompetence, of naivety and self-satisfaction. Except for Avery, who is given le Carré’s own 1965 age of thirty-four, the main characters are older men who have lived through the war, reckon themselves to have had a good war, and do not think they have anything new to learn. It’s still toe-curling to read le Carré’s acid depictions of what they get up to.

At the centre of it at all, there is Military Intelligence’s project to put an Agent over the border into East Germany to check for a suspected (on very little evidence) missile base and to report back to temporary Base camp over the border in West Germany using a heavyweight crystal radio and morse code. Throughout the novel, if something can go wrong, it goes wrong. A courier and the inserted Agent are both killed.

So the author gets us into a state where we go on reading in a state of horrified incredulity. His characters, for example, think themselves quite above keeping a secret, to be shared only on a need-to-know basis. They are animated by the spirit of a gossip shop; a brothel would exercise more discretion. I was reminded of a story I was once told (by Robert Silman around 1970) of self-assured surgeons who regarded themselves as so much above the ordinary run of mortals that they felt free not to wear surgical masks when working at the operating table.

The novel is dated in an interesting way. I imagined the manuscript given to a present-day London editor. They would either reject it outright or there would be angry Microsoft notes in red all the way through. The novel runs on national, racial, gender, class, you-name-it, stereotypes which all add up to a dreadful picture of Political Incorrectness. A modern editor would hold their nose and turn the whole thing Bland. It would create a very interesting contrast. Le Carré, an angry young man if ever there was, does not mince words and that is the passion of the book; as a politically correct novel, it would have no life to it.