Review: Michael Rosen So They Call You Pisher! 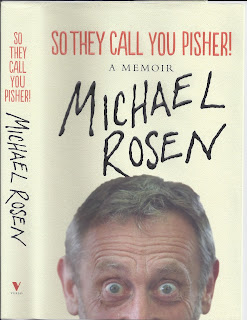 Writing autobiography and memoir is a perilous business.  We forget and what we do remember has often been re-arranged in our minds but without our knowledge. Then there is embarrassment about how we were then, embarrassment which we may try to counter with a heavy dose of irony signalling that Yes, We know, This is toe-curling. Then there are anxieties about what can and can’t be said because so-and-so is still alive or because we reckon that our audience will boo rather than laugh if we go down some particular, incorrect path as we surely at some point did. Everyone has their satanic moments.

Recently, I tried to imagine what I might say if asked to talk, autobiographically, to a student audience in Oxford and I came out in a sweat. I'd like to think this had something to do with the fact that I see little point in public talk which does not have some kind of edge. Nowadays, at any rate, I wouldn’t want simply to make an audience feel good; I would want to challenge them a bit. Oh, I’m willing to come at it gently enough but, eventually, I want to get to the edge, the point at which I say something like Excuse me, I am not convinced. The problem is not a tucked away, shit-covered statue of Cecil Rhodes. The whole genre of monumental sculpture is misconceived. The thinking behind it is essentially atavistic and the realisation is almost always artistically without merit. Imagine there’s no statues. It’s easy if you try. The worst thing that can happen is that we pull down one lot only to put up another.

Some of my fellow students in 1960s Oxford were born with a silver spoon in their mouth - in some cases, a fistful of spoons. Thus William Waldegrave, whose A Different Kind of Weather I reviewed here on 28 April 2015. Others were nourished from birth, and sometimes force-fed, with cultural capital which in Michael Rosen’s case spills in a continuous stream onto the pages of his memoir. It’s hard to believe anyone could acquire so much capital so early in life.

Rosen (born 1946) is the younger son of second generation migrants who are upwardly mobile. Through the 1950s and into the 1960s, living in London, they manage at the same time to be Communist, Jewish and sharp-elbowed, though it’s unclear in what order. I knew Michael Rosen’s father a bit,  a very lively and committed external examiner on a university course I directed, and before that I knew his son as a student at Oxford and then later as someone whose books I read to my children.

His memoir is lively and funny. His coming of age chapter La Colonie when at sixteen he goes to summer camp in France, without parents or older brother, is very well done. I found the book most interesting when he assembles bits of his cultural capital as it stood at a certain date and then stands back to reflect on what is going on in his life. But for the most part he sticks to a conventional Memoir form and, for example, does not attempt to link Life (to age twenty three) to later Work, except very incidentally. Maybe that is simply someone else's job.

Life from an early age was busy, and Rosen has always been busy – over 140 books, says the blurb. Perhaps too busy. I found my father intolerable because he played the part of an alcoholic who makes everyone around suffer, and my father most of the time wasn’t even drinking. He was just uninterested in other people’s needs or wishes when not actively hostile. I got very little from him, or worse. But Michael Rosen describes a father who is always there, always solicitous, always urging on. His mother tries to shield her son a bit, “Leave him alone. He’s tired”, but rather ineffectually it seems. Despite never having had such attention, I am sure I would have found a father like that intolerable and so I tend to read some of the incidents of rebelliousness catalogued in the later part of the book as a reaction to Harold’s omnipresence in his son’s life as well as to the absurdities of the institutions including Oxford that we attended. Michael cannot resist a jape and sometimes they backfire.

He closes his book with a letter addressed to his father but written after the latter's death and even though the content is not directly about their relationship, indirectly I suspect it is all about that.


I seem to be  included at page 270 but remember absolutely nothing of the story there except that I know it must be true because I have a photograph which is in my Archive. At the time, this has been pinned up on a board and graffitied. I still find it excruciating, which may explain why I have so completely forgotten why I am there on the right playing the part of a complete prat or prick (take your pick), though possibly outperformed by Judith H in the middle who has just told her mum she is going to be in the school play. Martin W is looking behind having been struck by the appalling thought that we three may be parading alone along Broad Street, Oxford. 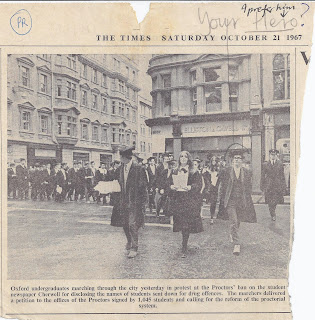 On this business of cultural capital. Michael Rosen absorbs it with his mother's milk and  his father's spoonings. It does make a difference. I got all my capital from school and the balance from home was probably negative. How many children learnt to eat up their lettuce because it contained lodnum [laudanum] which was good for you? But being entirely school-made, my guess is that you always feel a bit of a fraud. Michael Rosen was cheated out of a First Class degree by a spiteful examiner, Professor Dame Helen Gardner. He ends his book on the story with which I was familiar and which reads as if it still rankles. But I doubt her spite does cut into his capital, or much into him.

I wasn't cheated out of my First and indeed got one with knobs on - a congratulatory letter. About thirty years later I started to have a recurrent anxiety dream. I had decided to do the Oxford PPE course again, as a sort of refresher and challenge. But it had become much harder and I was unsure that I would be able to finish the course and increasingly certain that I would not get a First, might not even Pass. The anxiety became more intense, and I would wake up with the thought that I would have no option but to quit the course before I was put to the test. Because without the public endorsement, there was nothing in me.
Posted by trevor pateman at 09:53