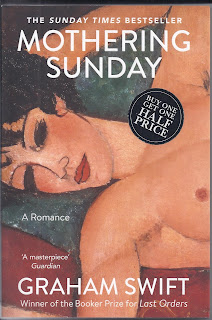 I read this novella - 35 000 words – and thought it was beautifully conceived and crafted, one of the best things I have read this year. So a couple of weeks later, I have read it again to see how it is done. Some of the results are quite surprising. For example, the text runs to 149 pages. Exactly half way through at page 74, Swift baldly announces the death of his second most important character, Paul Sheringham:

She had not known he was already dead.

That one sentence provides new interest for the reader, now waiting to discover how Paul died and what will happen next.

The story is heavily marked by premature deaths, starting in the very first line:

Once upon a time, before the boys were killed…

The short lives of boys killed in the trenches of the first world war then stands in dramatic contrast with the longevity of the main character, Jane Fairchild, who appears first as a twenty-two year old housemaid involved in a passionate, sexual relationship with Paul who at twenty four is the youngest of all the brothers, the only boy from two neighbouring families who was too young to be sentenced to death in the trenches.

The heart of the novel  is a narrative of the last time Jane and Paul are together, Mothering Sunday 1924. This occupies the first half and is exquisitely done. Paul dies at twenty four but Jane lives to ninety-eight (it works out at 1901 – 1999), a long life on which Swift places great emphasis, and she becomes a well-known and much-interviewed novelist but one who never discloses the tale which Swift has told in the first half of his book.

Second time around, I had some doubts about the long recessional which forms the second half of the book. Swift writes about how Jane becomes a novelist, the books she reads and what she says about them when interviewed in later life. ( She reads Kipling, for example, who wrote a Recessional).  It chronicles the titles of the novels she writes. It is as if Swift is seeking some quieter objective correlative for the emotions which sear the first half of the book and the abrupt loss which on Mothering Sunday 1924 brings to an end the love affair of the young maid Jane and the young master Paul. But it also suggests, I suppose, that though we normally think that novelists will always end up writing about what has most touched them in their lives, that may not be a general truth. When her secret life as Paul’s lover ends, Jane has to carry on as the housemaid almost as if nothing has happened. She has to close that book and can only find a future by opening a new one. Art is long, but life is short.
Posted by trevor pateman at 03:26