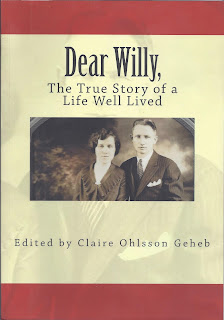 This is an unusually interesting compilation of family letters and personal journals, kept in a suitcase by Willy Geheb (1900 - 1988), a blacksmith's and small farmer's son from rural Saxony in the eastern part of Germany. After the First World War, he leaves his home village to make his fortune in Brazil, Mexico and finally Chicago where he becomes an American citizen in 1934. He maintains - and keeps - a correspondence with his parents and members of a large family much of which survived to be discovered after his death, though material from the period after 1947 is missing.

From the point of view of a social historian, there is much here of interest. There is the hard life of an immigrant, the ambivalence of his family about his departure, their own changing circumstances as Germany struggles in the 1920s, their prompt adoption of Hitler in 1933, and their total dependence on Chicago-based Willy and his wife Irma for material help after Germany's defeat and the incorporation of their region into the Soviet Zone of east Germany. The letters which detail the contents of the parcels they have received are testimony to the poverty of immediate post-war Germany. But the birth of children is a constant of the family history, and no one ever hints at the possibility of achieving a better life through limiting family size. For, traditionally, children were assets to farming and small artisanal families. But in this story,not all of them survive and many are plagued by ill health.

Willy's blacksmith father is a conscientious letter-writer and tries to hold together a narrative and a set of values for the whole family until his death in 1945. He is stern, moralising and does not have a moment's hesitation in adding Hitler and Nazism to the Lutheran Christianity which serves him up until 1933. One of his sons, Paul, who comes across as rather unpleasant in his earlier letters to his brother Willy becomes an active Nazi. Willy in his letters is always urging other members of his family to get out and make their fortune in the USA but none do. His own letters are lively and concerned and, in the end, after 1945, he becomes the typical migrant burdened by the material needs of those back home, though he never complains and goes well beyond the call of family duty..

The family documents itself in photographs as well as letters, and the documentation must be unusually extensive for a family where no one has much formal education, even though by the standards of their village, they are well-established and relatively prosperous.

There is a Wikipedia page for Willy Geheb's home village of Schmirma and this book should certainly be added to the references on that page. There was no point at which the translation struck me as likely to be forced or wrong, and the book reads easily with fairly unobtrusive editorial comments to help sustain transitions in the story.

Most books I review here are ones I have bought; this one was sent to me for review.