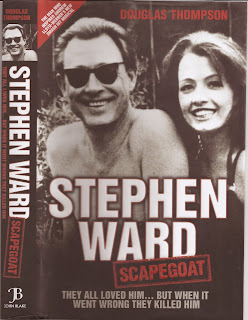 Stephen Ward was born in 1912 and died in 1963. Except for Prince Philip, Duke of Edinburgh, nearly all his friends and acquaintances who were of the same generation are dead and so can be written about freely without fear of British libel laws. Douglas Thompson's book contains much gossip about the Forbidden Pleasures once enjoyed by the now deceased.

There would be more gossip available if the Public Records were opened but those relating to the Profumo Scandal (Ward, Keeler, Rice-Davies, Ivanov, Profumo) have been sealed beyond the normal period of fifty years. A week before I am writing this, Richard Davenport-Hines (author of An English Affair reviewed here a year ago on 13 January 2013) suggested that this is partly to protect the reputation of Prince Philip who met Dr Stephen Ward back in 1947 over lunches at the dissolute Thursday Club - a sort of older man's Bullingdon Club - and was later sketched by him.

Thompson's book and Davenport- Hines' (which does not appear in Thompson's Bibliography) are chalk and cheese. Hines is not an academic but writes at the academic end of the genre of political biography and political history. Thompson is a journalist who writes in sentences which aren't. He doesn't footnote the claims he makes and often you do not know whether you are reading cut and paste from newspaper gossip columns going back to the 1950s or whether you are reading interview material of  unknown vintage. Occasionally, he dates a claim and attributes it to an interview he has conducted but not often enough for anyone interested in getting closer to the truth.

Every society forbids some Pleasures, either by Law or Public Opinion or both. Every society makes the prices of transgression higher for some citizens than others. Often enough, it is the poor and powerless who are punished hardest but quite often the rich and powerful are hardest hit - if they are found out and if police or press decide (or are persuaded) not to turn a blind eye.

The desire to experience Forbidden Pleasures affects members of all classes and in any big city, there will be rich and powerful individuals seeking the forbidden. And where there is demand there will always be a supply. The rich and powerful soon find themselves in contact with criminals and lower class individuals on the make. And in the Cold War of the 1950s and 1960s, they also found themselves in contact with the Spies of the Other Side.

Drugs, Gambling but above all Sex provided the soft underbelly of the post - 1945 British Establishment and it was through it that Soviet spies hoped to extract juicy morsels of intelligence and even to recruit Agents willing to go in search of their own country's secrets. It was hardly Soviet rocket science which propelled Soviet Naval Attaché Yevgeny Ivanov into the hedonistic set around Dr Stephen Ward. It was the bleeding obvious.

The people around Ward could not protect themselves by Coming Out. What they were doing was either illegal (homosexuality, for example) or regarded by Public Opinion as incompatible with holding any position in politics or government administration, not to mention the Church and the Law. The British War Minister John Profumo and his wife the actor Valerie Hobson may have agreed between themselves to have an open marriage, but in the court of public opinion, that still left Profumo an adulterer - and, of course, a security risk the moment Christine Keeler began to share her pillow talk with Colonel Ivanov (and she says she did).

All this is well-known and much-written about. More importantly, Thompson agrees with Davenport-Hines' and others (including most recently Geoffrey Robertson QC) that the prosecution of Stephen Ward  for living on immoral earnings was a frame-up initiated by the then Home Secretary the very-Christian Henry Brooke, eagerly executed by officers of the Metropolitan Police (using quite a bit of intimidation of witnesses), assisted by the security services, hurried along by the Judiciary, and finally whitewashed in the Enquiry conducted by the very Christian Lord Denning. The whole affair shows the Nasty side of an Establishment fearful of being discredited in the eyes of its overseer, the US government, and, more specifically, fearful of Conservative electoral defeat.

Things have changed. When 48 or 49 year-old Stephen Ward first asked Christine Keeler for a dance, back in 1961, he had false teeth (this titbit from Douglas Thompson). Like his entire generation, his mouth tasted of tobacco and his clothes were impregnated with cigarette smoke. Cologne would have disguised lack of personal hygiene.

Nowadays, Ward would not have false teeth and might well not smoke. Some of the Forbidden Pleasures are no longer forbidden and can be talked about and enjoyed, most obviously, the homosexual ones. But overall, I doubt that much has changed. From time to time, the Gossip columns still finger government ministers they suspect of enjoying Forbidden Pleasures, occasionally a Minister still falls on his sword, whistleblowers are still given a nasty ride - and as for the spies, well, that's the biggest change; they have gone electronic.


________________
Note: Normally, the books I review here are bought from bookshop displays. On this occasion, the publishers of Douglas Thompson's book (John Blake) wrote to offer me a Review Copy.