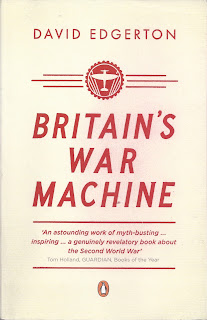 Between the retreat from Dunkirk in 1940 and the Normandy landings in 1944, Britain was not fighting a land war in Europe and most of its Army was at home polishing its boots: the Middle East and North Africa did not empty Britain of troops, partly because Indians and Poles and other proxy groups were fighting there for us.

But Britain's Navy was busy destroying and neutralising Germany's, blockading Germany but keeping the shipping lanes open for the movement of Allied troops and material, military and civilian. Britain continued to import vast amounts from its Empire and its friends in countries like Argentina.

The Air Force bombed Germany from ever greater heights and with ever greater effect, deploying aircrews under the command of Arthur "Bomber" Harris which included Czechs, Poles, Australians, Canadians and New Zealanders. Planes were built in Canada as well as the UK and shipped over. From 1941, the RAF was joined by US planes flying under US control from bases in Britain.

Area bombing killed German civilians in vast numbers, but an even nastier war was fought on the ground in Eastern Europe - in the Bloodlands to use Timothy Snyder's expression - where the Red Army and the Wehrmacht were pitted against each other and where the latter was enmeshed with a vast organisation for enslavement and extermination of the local populations.

People in Britain never experienced anything a fraction as terrible as the RAFs carpet bombing or as horrific as what happened all over Eastern Europe. They did not live in fear and they did not go hungry. Not many were killed.

A confident war-time government in the UK felt no need to suspend the democratic process: elections took place and fierce debates in Parliament. It felt able to buy freely on credit from the Dominions and Colonies, which built up vast sterling balances in London. It created a vast, well-funded and generally well-oiled war machine.

David Edgerton's book is full of intriguing detail about that machine - about how it was created and managed, about its productive capacity, and about its shortcomings.

All the initial reviews of this book see it as a game-changer, offering a fresh paradigm for thinking about the War the British fought. Edgerton's principal thesis and leitmotif is that Britain "was never alone and never had to fight a total, people's war of the sort that was fought on the Eastern front" (p 302)

This seems true and important, though much of the actual book is taken up with thumbnails and what are basically Lists. These do not so much sustain the main thesis as illustrate how Churchill's government ran the business side of the War - deciding on weapon priorities, getting the right weapons produced in the right numbers, ensuring improvements were made, responding to changes in the enemy's military capacity, and so on. This is interesting and brings into focus the work of thousands of engineers, scientists, businessmen and scientific civil servants who together organised a vast, functioning war machine of new factories and research establishments.

I did feel that one of my own beliefs had to be revised. I had thought that the War opened careers to talents - that to some degree it broke down the class system simply because Britain could not afford to sustain the incompetence and inefficiency it entailed. Edgerton, by contrast, sees continuity between pre-war and war time institutions and practices with public school boys, mostly Tories and cronies, running the shows that mattered. There are a few Lefties and working class boys in Edgerton's story. There are no women.