Review: T.S.Eliot, Notes Towards The Definition of Culture 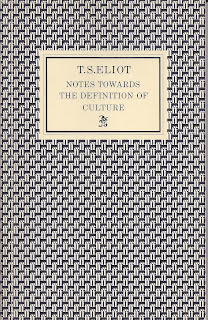 In 1948, T S Eliot won the Nobel Prize for Literature and published "Notes Towards the Definition of Culture". He was sixty years old and a Director of the London-based publisher Faber and Faber. This short book - 110 pages of text in its basically unaltered 1962 edition - has three aspects of which I approve.

It is written as a contribution to debate on topics which university teachers also concern themselves with but by someone who is earning his living otherwise and who is thus free from whatever constraints happen to impose themselves (at any given time) on academics. In 1948, such contributions by those not paid to produce them were more common than they are now -  and I would like to see them become more common again.

It is a contribution to the genre of belles lettres by which I understand non-fiction writing of a reflective, discursive or argumentative character which proceeds largely unencumbered by the dutiful footnote and bibliographic references which an academic writer is supposed to supply. Academics sometimes think that the main achievement of modern universities is to have killed off belles lettres.

Finally, with only a little stretching of the term, it is self-published like everything I write and most of what is published on the Internet.

The trouble is that after sixty four years, it does not stand the test of time. It is just awfully dated. Should someone submit it to Faber and Faber today, it would be returned without comment - unless, perhaps, an acid "Try writing when you are not holding a ruler between your buttocks".

But it is not dated in the sense that it is too closely tied to the European situation in 1948. It is dated for the opposite reason, that though it professes to engage with that situation - an Appendix to the book even consists of three talks given on post-war German radio - it is far too detached and coy about it. Eliot just doesn't engage with what has just happened in Europe and what is now happening all around him in England. Instead, he is nudging and winking all the way through the text to those who he thinks might share his prejudices - and, in particular, the prejudice that from now on,  unless we are very careful, it is going to be downhill all the way for the cultures we value. At one point, he  does simply admit that this is what it is all about:

there is no doubt that in our headlong rush to educate everybody, we are lowering our standards, and more and more abandoning the study of those subjects [ no need to say what they are - TP] by which the essentials of our culture - of that part of it which is transmisible by education - are transmitted; destroying our ancient edifices to make ready the ground upon which the barbarian nomads [... etc etc TP].
The previous paragraph is to be considered only as an incidental flourish to relieve the feelings of the writer and perhaps of a few of his more sympathetic readers. (page 108)

Now this paragraph - despite the clunk of cliché - is actually much better than much of what surrounds it, since it calls a spade a spade and a rascal a rogue. It is the nudging and winking elsewhere which is exasperating.

Buried in the text are some quite carefully formulated  - and, in my view, at least partly true - claims about the nature of "culture" and in particular its organic, growing and unpredictable character and its connections to deeply embedded social groups - call them classes or elites if you like. Culture is not something you can administer or impose.  Banged up in a Mussolini prison, Antonio Gramsci formulated ideas which have a strong family resemblance. But he worked outwards from a paradigm case history, the development of the Italian national language over which, in the 19th century, a long and loud debate took place between those who thought you just had to decree it and teach it and those who thought a national language was something which would grow within the context of  other nationalising developments. Eliot could have written a stronger book if he had chosen a strong paradigm case example for his argument. Instead, we get too much hand waving towards "religion"  which only occasionally crystallises into something we can develop an argument around. And insofar as it crystallises around the Church of England, well, Eliot picked the wrong horse.
Added March 2020:

This is one of the most-visited posts on this Blog. I re-use and develop the material here in my book Between Remembering and Forgetting (degree zero 2020; try Amazon or Waterstones) which is, in part, an attempt to develop a theory of cultural change within a broader set of reflections about individual and collective memory. A citation would improve any essay ....