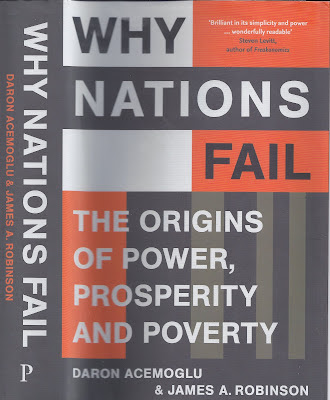 I am not convinced. This book comes with 14 pre-publication product endorsements, five of them from Nobel laureates, so the weight of world opinion is against me. But let me try to make my case.

In a 529 page book, Acemoglu and Robinson (A&R) survey world history - Neolithic to the present - through a score or more of small or medium-sized case studies. They leverage these cases into examples of the thesis they wish to maintain, using just a handful of not very abstruse concepts.

Some of the case studies are thumbnails and, occasionally I had reservations: for example, I think Russia was more industrialised and wealthy before 1914 than they allow, collapsing between 1917 and 1921. It then grew from a much lower base than it had achieved prior to 1914. Some of the more extended cases are well-structured and carefully argued: those of South Africa and Botswana, for instance.

The general idea is that nations can sustain economic development over the long term only if they are open both economically and politically - "inclusive" is the concept A&R use: a useful concept because more inclusive than "free market" or "democratic".

For short periods, nations which are inclusive only at one level - economic or political - can make progress but then they will hit the buffers unless the non-inclusive level opens up. A&R reckon that this will happen to China where the control of the Communist Party will sooner or later come into conflict with the relatively inclusive economy it has unleashed. This thesis is not unfamiliar - I think I read it first in Will Hutton.

A&R use "extractive" as the opposite of "inclusive" and, in effect, write about extractive elites. At the economic level, these operate through guilds and monopolies and general hostility to outsiders and innovation. At the political level, they take the form of absolute monarchies, one party states and common-or-garden dictatorships which extract whatever they can from whatever is going. The two levels inter-connect, as in cases of "resource curse" where a single political elite monopolises the revenues from production and export of a nation's only valuable resource - diamonds, coffee, oil.

Extractive elites get even richer when they find ways of (further)depressing labour costs, whether through slavery, serfdom, land apportionment or other more subtle methods of confining a labour supply to just one kind of employment possibility.

Extractive economies and polities have serious problems accepting technological innovation and the "creative destruction" that implies or accepting independent entrepreneurship. With remarkable consistency, they end up banning them and killing people involved with them. A&R give many telling examples.

Extractive states also have serious problems of control, since the rewards from being the elite are so great that others may try to take over the act. From this, civil war. And the resources being extracted may run out or go out of fashion. Whatever, extractive societies - like the DR Congo for all of its history - generally end up producing mass poverty and political instability.

Whereas inclusive societies manage to get into a virtuous circle where things can only get better, extractive societies generally end up in a vicious circle and things only get worse. Thus Spain over many centuries in the past or North Korea today.

Exactly what happens to a given society depends a lot on contingent events which produce what A&R call "critical junctures". They use the Black Death in Europe as a paradigm example. The thesis they advance here denies historical inevitability and stresses historical contingency - things could have turned out otherwise.

So far so good. Now to what I think is the big problem. A&R paint some rosy pictures of inclusive societies, old and new: England after 1688, the USA, Australia, Botswana. And they paint some terrible pictures of failed extractive nations in Africa, Asia and Latin America.

They write about colonialism, emphasising the way in which in Latin America and Africa local extractive elites simply took over at Independence the role of colonial elites, doing nothing to enhance the lives of their citizens. But they do not write about the continuing role of former Imperial powers - or the United States - in sustaining these elites.

Yet a large part of world history of the 20th century is the story of cuddly-friendly inclusive Western societies doing their utmost to sustain extractive elites in power in Latin America, Africa and Asia. They did it - and continue to do it - either by direct military intervention against forces seeking more inclusive economic and political institutions, or by selling armaments on an extraordinary scale to the world's worst regimes so that they can keep themselves in power and their people poor. In this, France has played an appalling role in Africa; the USA in Latin America and Asia; and the United Kingdom wherever there is half a chance - Saudi Arabia, for instance.

This kind of vicious interdependency is not discussed by A&R.Developed and followed through, it would greatly alter the outlines of the world history they offer us. It does not mean that their concepts are not helpful, nor does it invalidate their often valuable analyses of the dynamics of development. But societies are not closed. And the Goodies from one perspective often turn out to be Baddies when looked at in a wider perspective.
Posted by trevor pateman at 00:41