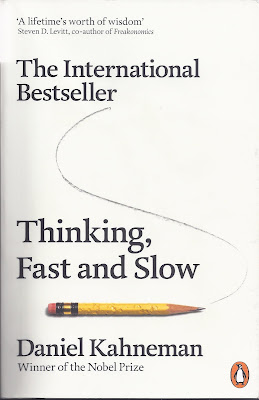 There is an awful lot of Experimental Psychology in the world; some of it must be true. Over the decades, the Military has been its biggest sponsor in search of ways to ensure that missiles are launched at the right targets; sometimes they are.

This highly readable, well-paced book is both autobiographical review of Daniel Kahnemann's life work as an experimental psychologist and a survey of the state of the field in which he is a dominant figure. The book gets better as it progresses and we get to the work in what is now called "behavioural economics" and which has undermined the assumptions of orthodox economics about utility, about risk, and about rationality (in the sense of coherence). The later chapters are, in fact, more argumentative than experimental and align with work on transitivity of preference and so on done by other Nobel prize winners like Kenneth Arrow.

Back in the 1970s, I stopped reading Experimental Psychology and turned my attention to Cognitive Science, Artificial Intelligence and theoretical Linguistics.

I had a number of doubts. In relation to Social Psychology, I got tired of reading tautologies which were independent of their supposed experimental support ("Extroverts are more likely to initiate conversation with strangers") but out of which whole textbooks were constructed.

And in relation to experiments to demonstrate how the mind works, I felt it likely that we were being shown how paid but under-motivated student "Subjects" responded to weird experimental requests and not much more. The experiments would not bear the weight of interpretation placed upon them.

I still felt that working my way through Kahenmann's opening chapters Specifically, I felt that if you brought to bear Relevance Theory (as developed by Dan Sperber and Deirdre Wilson out of the ideas of H.P.Grice) then you would get a different take on at least some of the key experiments Kahnemann (often in collaboration with Amos Tversky) devised.

Consider the apparently much-discussed Linda experiment (Chapter 15 in the book under review) . The core finding is that large numbers of undergraduates and even postgraduates can be got to say that

is more probably true than

"Linda is a bank teller"

However, when you look at the experimental set up, you see that a central element is the provision of information which sets a trap. Though setting traps is very much what Experimental Psychology is about (and we should "know" this by now), innocent students take the information they are given in good faith and proceed very much as Relevance Theory suggests we proceed in all contextualised language processing: we use least effort (Kahnemann's "System 1"), assume the relevance of everything that is said to us and try to maximise the informational yield from what is said paired with the context in which it is said.

So the students are told all this stuff about Linda's biography, they assume it somehow relevant, and they compute "Linda is a bank teller and is active in the feminist movement" as the maximally informative conclusion which can be derived from the information which has been ostended to them.

The students' mistake is not a mistake of logic; it is the mistake of assuming that the Experimenters are acting in normal conversational good faith. But they aren't. They are trying to prove that students are idiots and that is about all there is to it.

In support of this, look at two different descriptions which Kahnemann gives of the Tom W experiment, the twin of the Linda experiment. At page 147, Kahnemann gives us the information about Tom W. which was ostended to the student Subjects. It is preceded by the following contextual information, also ostended:

"The following is a personality sketch of Tom W written during Tom's senior year in high school by a psychologist, on the basis of psychological tests of uncertain validity:"

Then at page 153, after showing how the Trap succeeds, Kahnemann reprimands us,

"But you were explicitly told that the description should not be trusted".

"The description should not be trusted" is not synonymous with "tests of uncertain validity". In the Trap which has been set, the Subjects are permitted to accord some validity to the information ostended to them. They were not told to completely disregard it. In that case, what would be the conversational point of ostending the information in the first place? In terms of Relevance Theory, it would be wasted effort which invited more wasted effort.

Put more generally, I want to say that this kind of Experimental Psychology exploits the Trust Bias without which neither social life (N.Luhmann) or cognitive life is possible. It's like a Three Card Trick repeated through endless minor variations.

But as the book progressed, I felt Kahnemann's experimental set-ups increasingly escaped this line of criticism and I was convinced by his arguments about how we (and not just Subjects) approach gambles, risk assessments and choices which affect our wealth and health. It was an Ah Ha! experience to see how things like Nudge Theory ( Richard Thaler and Cass Sunstein, Nudge) developed out of the kind of Experimental Psychology Kahnemann has done in the latter part of his career. And there are moments when Kahnemann rounds off an analysis with a dramatic flourish which really does make you sit up. So he concludes a discussion of preferences and preference ordering with the claim, " framing should not be viewed as an intervention which masks or distorts an underlying preference ... At least in this instance ... there is no underlying preference that is masked or distorted by the frame" (page 370)

I am not really in a position to judge whether, having neglected Experimental Psychology for forty years, I am now up to speed thanks to one book. But there is much of real interest in this book from the pen of a major theorist now at the end of his career and I don't regret the time it took me to work through its 418 pages (498 with all the add-ons).
Posted by trevor pateman at 02:43