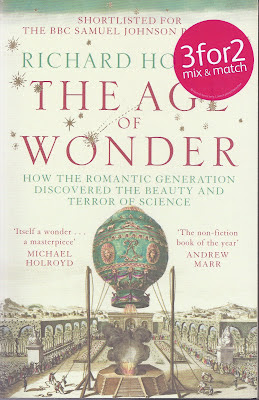 Four hundred and sixty nine pages of small print in my paperback edition plus another eighty pages of apparatus, but it's a very readable as well as an immensely knowledgeable book.

For your money (a mere £9.99 even before 3 for 2)you get four major biographies - of Joseph Banks, of William and Caroline Herschel, of Humphry Davy - with lesser biographies of Montgolfier and other early balloonists, Mungo Park, Mary Shelley, Michael Faraday and others. The Lives, Loves & Labours of these pioneering explorers and scientists are vivid and packed. I didn't skip any of them.

But I did skip most of the occasional excerpts from Romantic poetry which illustrate how closely the Romantic poets interested themselves in contemporary science, responding to it in verse. That's the problem: poetry is an unfortunate medium in which to wrestle with real science and its implications. It's a prose subject. Holmes does briefly allude to the possibility that that is the case: see page 344.

He also gives us excerpts from the versifying of the scientists themselves, usually addressed in lyric mode to young women who they are wooing or have wooed. Yes.

Richard Holmes isn't really aiming at a history of science in the academic mode and this is what allows him to write such a very readable book. But along the way there is a great deal which could be turned to further use by someone more theoretically minded. Holmes does a lot of spade work on how women were able to find some kind of place in science at this time (the 1760s to the 1830s). And there is a great deal here on social mobility - and resistance to it - and on the role of patronage and sponsorship, state and private. I just pick out one charming bit of information: the first person to salary a woman (Caroline Herschel in 1787) as a professional scientist was King George III.
Posted by trevor pateman at 12:17