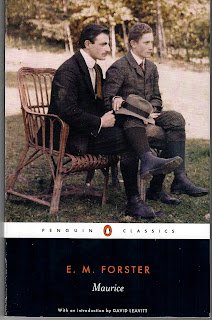 I hadn’t read this before; it was a disappointment. Its history is fairly well-known: written fairly impulsively in 1913-1914 as a novel which the author knew could not be published, it did not appear until 1971, shortly after the author’s death. It could have been published before then but the elderly author (quite reasonably) did not want the hassle it would create - not so much legal, since there is little in the book which even the most vicious lawyer in the Mervyn-Griffiths-Jones  mould could seize upon, as personal - Forster was Establishment at the highest level: Fellow of King's, Order of Merit, Companion of Honour. The novel can  be summarised as a gay male coming out story with more than a suggestion of a happy-ever-after ending.

In terms of structure and style it is unremarkable, a chronological story told more or less in plain prose.  The author’s effort was presumably focussed on the challenging because fairly novel task of actually writing about male homosexual love and/or sex. He has two shots at it: Maurice’s anguished first affair with fellow Cambridge student Clive is framed by the Platonic ideal of the Phaedo: they do sort of have sex, but not much, and it’s not the important thing. Maurice’s second post-Cambridge affair is thrust upon him by an importunate gamekeeper, Alec, interested in physical sex as the gateway to whatever else might be possible between two men. Maurice decides - very rapidly - that a bit of rough is what he has always needed and throws up his conventional life to embrace a chance which won’t repeat itself; Alec also throws up a life. It’s Bernardine Evaristo stuff, if you will excuse the anachronism.

Over a hundred years on from its composition, this either-or framing in terms of Platonic soul and decidedly non-platonic body can only seem rather dated or, at least, limited. As a result, I guess that for most readers, the novel will present itself as a period piece which reminds us of how anguishing it was to be young and gay - and middle-class -  in early twentieth century England..