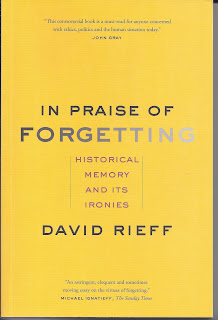 When I saw this book in Blackwell’s Oxford shop during a May 2019 visit, I knew I had to buy it even though I wished I hadn’t seen it. For a number of years, I have been working off and on around themes of memory and forgetting, beginning in the 1990s with a critique of moralising theories of individual learning which ignore unlearning (http://www.selectedworks.co.uk/unlearning.html ) and extending, more recently, into criticism of the emphasis which states place on collective memory and remembrance - there is a recent example of my writing here:

I’ve read David Rieff’s short book twice. It’s excellent, I can’t find anything really to disagree with, and I have a note of half a dozen books I ought to read as follow-up (it’s a pity the book has no Bibliography - I had to create one on the inside cover as I went along).

Rieff is not only very widely read, he has practical experience as a journalist of conflicts kept alive by so-called collective memories and he turns this experience to good account. He writes well, though sometimes in sentences sufficiently long and complex for me to lose track and have to start again.

Individual memories are extinguished with the death of their bearer. Before then, they have been subject to continuous mental processing and re-processing - things are forgotten completely, details fade, mis-rememberings intrude, sequences are jumbled. These truths apply both to what psychologists call episodic memories - usually, things which we can recall visually - and semantic memories, things which are organised into narratives of events which we believe we experienced first-hand. There is also a category of procedural memory - remembering how to ride a bike, and so on - which can be remarkably enduring. See Jonathan K Foster, Memory (2009) for these distinctions.

Collective memories - or what Rieff calls in his sub-title “historical memory” - are not really memories at all. In my country, there is a widely shared commitment to keeping alive the memory of the Wars - the First and the Second - but the “memory” is actually no more than common knowledge of a very abridged and usually tendentious historical narrative given emotional life by the ceremonies of remembrance in which it is embedded and which are very frequently repeated - once a year for Remembrance Day, and so on, but in reality it's a constant of British political discourse.

David Rieff puts such collective memories under critical investigation and concludes that from the point of view of securing peaceful and prosperous futures, they would often be better forgotten. They are often divisive and they can function to allow avoidance of the current challenges posed by new historical realities. He gives examples, discussed in some detail, and his harshest conclusion is that they are formulas for “unending grievance and vendetta” (page 110). Most of the time, his discussion is much more subtle and nuanced than those words alone might suggest, and this is true of his discussion of Holocaust remembrance which is woven right through the book.

The sublety is most obvious in those passages where Rieff takes his cue from Josef Yerushalmi’s Zakhor: Jewish History and Jewish Memory (1982) and probes the idea that the antonym of “forgetting” is not “remembering” but “justice” (page 91) and expands this by introducing the term “peace”. It is forgetting which often enough enables peace, even without justice, but in contrast the demand to remember links easily to the demand for justice, understood in terms of crimes and punishments. Rieff mobilises some significant examples of historical moments when forgetting has been accepted as a way out from conflict which yields peace even if it does not deliver justice: he references the end of white rule in South Africa, Spain at the time of Franco’s death,  Chile in 1990 , the 1995 Dayton accords in Bosnia, and  the 1998 Good Friday agreement in Ireland.

I’m writing this on 4 May 2019 when President Trump is in the United Kingdom to boost his re-election chances by meeting the Queen and going to Portsmouth to remember the 75th  anniversary (75th? what kind of anniversary is that) of the D-Day landings, historical memory in the service of a man who knows no history.