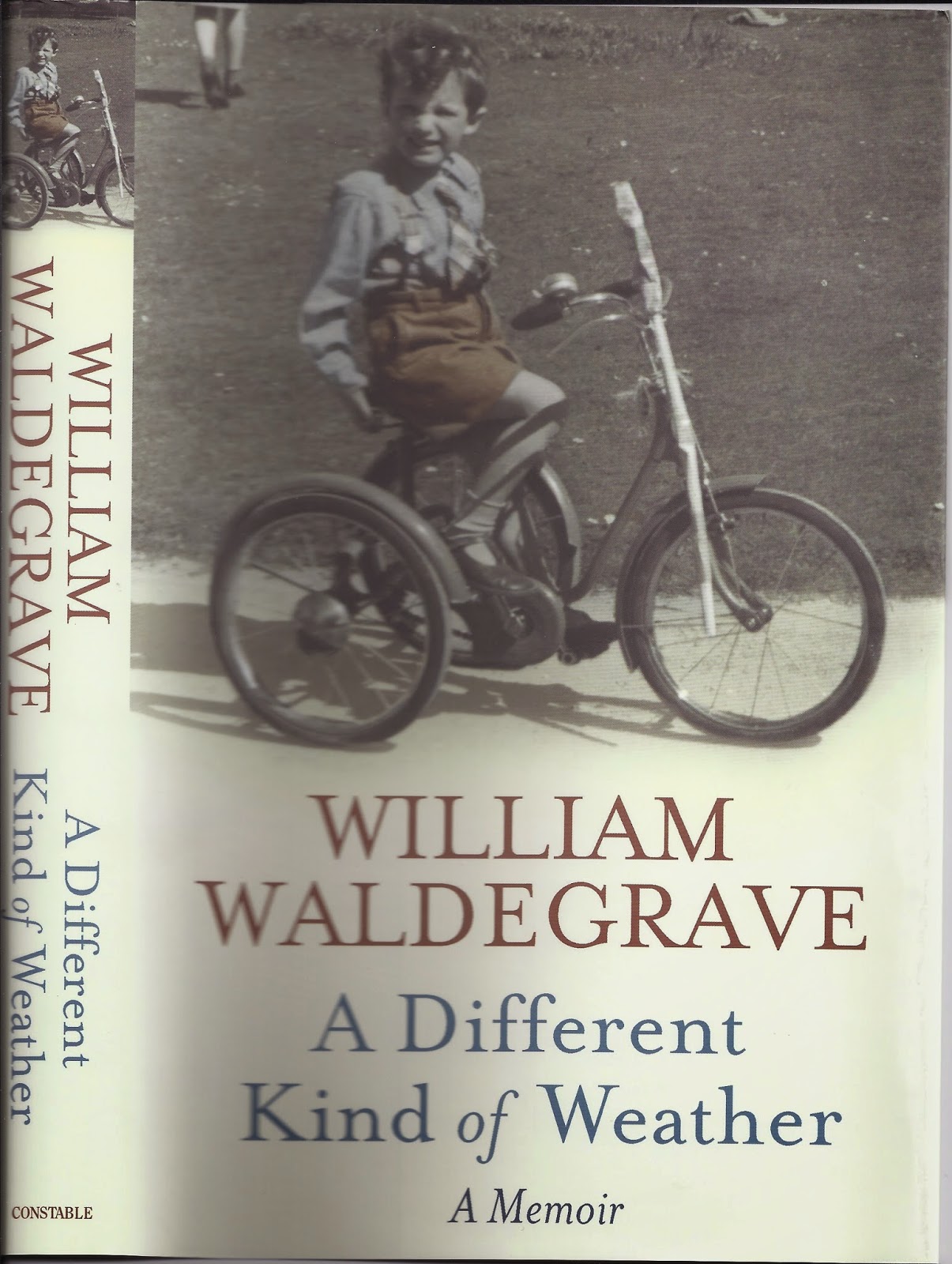 I do not normally buy politicians' Memoirs - nor do many people, it seems, since most Memoirs end up fairly rapidly remaindered. The cover and the title of this book are economical with the fact that it's a politician's Memoir. But I was not misled - I bought the book because I knew William Waldegrave a bit in the 1960s, through the Oxford Union, and liked him. But I did hesitate - I guessed that the book might make me think about things I would rather not think too much about. In this I was right.

Life isn't fair. I read Waldegrave's book immediately after re-reading Kazuo Ishiguro's The Remains of the Day, as fine a book now as when I first read it on publication in 1989. It's a wonderful book in part because it deals with things we all have to face - or find elaborate ways of evading: life not turning out the way we hoped or imagined, realisation of our own past mistakes as a cause of present unhappiness, life's unfairness striking us when we least expected or deserved it.

In the way it tries to engage with those things, Waldegrave's book is rather brave. The author is still an active paid-up member of the Establishment: member of the Privy Council and the House of Lords, Fellow of All Souls, Provost of Eton ... and he has a family and many friends and colleagues in public life who will read his book. But he tries to focus on aspects of a public career which would often enough be kept off the page. True, there are silences - you can't have the Provost of Eton going on too much about youthful sex, drugs and rock 'n'roll. And he is quiet about God and the Queen - the latter, not because of Doubts, but because his family has long been closely connected to the Windsors. As President of the Oxford Union in 1968, Waldegrave was well-placed to achieve the coup of bringing The Queen to a Union debate: there is a photo of the occasion in the book. I was one of the debaters, though perhaps in case I made Socialist trouble, I was put on in the second half, by which time Her Majesty would have left for home: 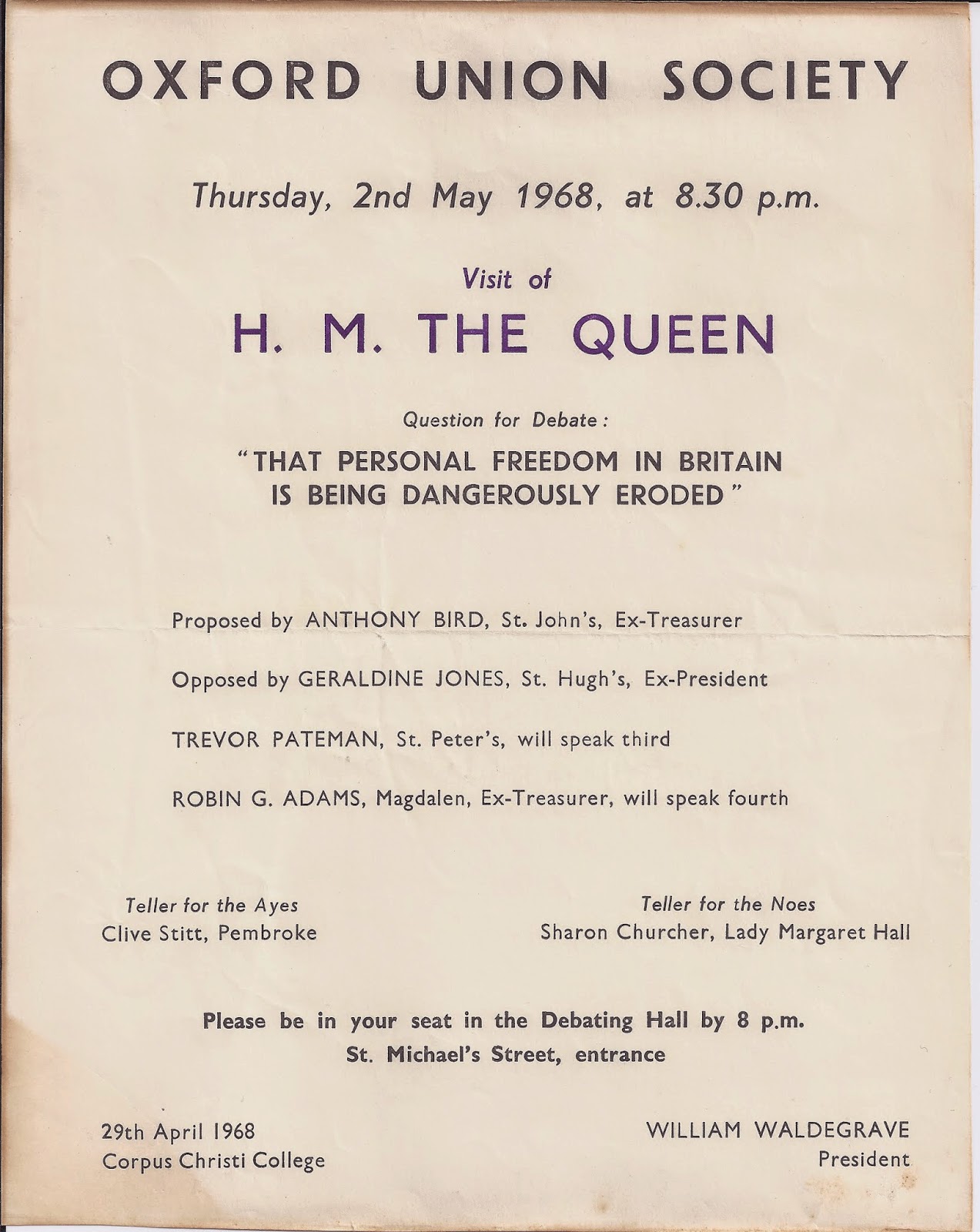 William Waldegrave was born in 1946, into a loving family which just happened to belong to that (small?) part of the English landed aristocracy which goes back centuries, is connected to everyone who matters, values culture and education, and has a very long tradition of public service. Life's unfairness: the unmerited advantage of a dozen silver spoons,even if of a now-obsolete minting:

Noblesse oblige is ridiculed now; but in the society we have created, which is even less equal than that of my childhood in terms of the distribution of wealth, no slogan exists to shame the rich into any semblance of solidarity with the poor (page 43)

So much for the "Big Society" of posh boys who don't know the price of a pint of milk. (Lord Waldegrave surely does know; his farms sell it).

There are other moments when Waldegrave rounds on something you would not expect:

Sentimentality about how the ultimate instruments of state power - soldiers, police - act in reality is a dangerous thing (page 84)

- this after being knocked unconscious by an American cop. And again, in relation to the episode which hit him most with life's unfairness:

It is wrong to commit the state to the support of the arms trade. It is wrong that the Ministry of Defence is a promotional arm of British Aerospace and other arms manufacturers, and that the Department of Trade backs up MoD in a perpetual joint campaign to promote the export of weapons (page 246)

Elsewhere, there is some partiality - he blusters about the sleaze and incompetence of the Labour Party, as if they invented the selling of peerages and the family silver (the latter Harold Macmillan's phrase for state assets -  Waldegrave admired Macmillan but worked for Thatcher). Though there are plaudits for the Civil Service, there is never a mention of the National Audit Office which has spent decades documenting the waste of public money by governments of both colours.

He blusters about Communism, not that what he says is untrue but that it feels a bit forced. And it made me recall a fine example of the freedom of action which comes with being patrician and not merely posh.

In the summer of 1968, I stood as the left wing candidate for the Presidency of the Oxford Union, opposing the liberal-with-a-small-c Ian Glick. We debated the motion, "That the Politics of Karl Marx should be consigned to Highgate Cemetery". The voting after the debate was a dead heat, leaving Waldegrave - the then President and also a recent President of the Oxford University Conservative Association- with the casting vote. He plumped for Marx, which I thought generous of him. Of course, there was still the actual ballot for President to come and I lost that.

I never regretted losing. Though I had been five times an elected member of the Standing Committee of the Union my candidature was half-hearted - I didn't canvas - and I wouldn't have done a good job. It was a Prize I was relieved to miss out on.

As the youngest of seven children, Waldegrave had the inevitable experience of always trying to catch up with older siblings. Why can't I win the prizes? is almost a smallest child's lament. His precociousness helped him to do so, both at Eton and later. He got a Congratulatory First from Oxford -  the Examiners wrote you a brief letter of congratulation, something they did for the three or four with the best marks out of the hundreds of candidates; he won University academic prizes. I did both of those things too, but as an only child escaping an awful background.

His party political career spanned the years 1979 - 1997; I settled into a University post at Sussex for exactly the same period. He was turfed out by the electors of Bristol and - after the harrowing experience of the Arms for Iraq affair, which sabotaged his career and has clearly deeply troubled him - decided to change course. Dissatisfied with university life, and knocked back by a bad divorce, I took early retirement at the earliest possible date, my 50th birthday.

My sense of him is that though he desperately wanted to climb to the top of the greasy pole of politics, his character was wrong for it. I have no sense of a killer instinct, of ruthlessness, of the kind of roughness which, say, Norman Tebbit shows here (page 203). There is charisma but not machismo. He's a decent, kind and thoughtful person who would - as he himself says - like to find a compromise if one can be found. Unlike Ted Heath or, say, David Miliband,  he isn't a bad loser. This book is an honest exploration, an unusual exploration, trying to make sense of the kind of man he was and is and ending up finding the answer in T S Eliot -  it's the Shadow falling between thought and deed (the quote is at page 267)

...for a great many people, the evening is the most enjoyable part of the day. Perhaps, then, there is something to [ my companion's] advice that I should cease looking back so much, that I should adopt a more positive outlook and try to make the best of what remains of my day. After all, what can we gain in forever looking back and blaming ourselves if our lives have not turned out quite as we might have wished?