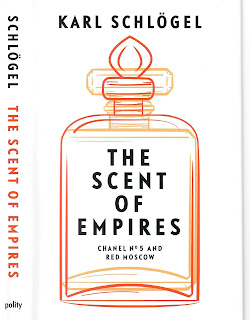 Timothy Snyder  provided a blurb for the publisher of this book and that caused me to buy it, since Snyder’s own work is very, very impressive. It’s a short book and I read it at one sitting, which may explain why I noticed some unnecessary repetitions of basic bits of information, suggesting that the book was prepared from shorter pieces prepared for separate occasions. An editor could have dealt with this.

The book doesn’t quite come off. I love the idea of taking something apparently minor or peripheral, like the history of the recipe for a perfume, and trying to make the whole world emerge from it as if from a grain of sand. But partly because of incomplete information - for example, the fate in the 1930s of one of the main characters, the Tsarist- turned Soviet-perfumer Auguste Michel - we are left with sketches rather than any whole picture.

Brevity also creates the occasional misunderstanding. After Stalin’s death, his henchman Lavrenty Beria appears in person ( p 116) to release Molotov’s wife Polina Zhemchuzhina, exiled in 1949 and re-arrested again shortly before Stalin’s death. She is a major figure in the narrative since in the 1930s she headed up Soviet cosmetic and perfume manufacture and in 1939 achieved the distinction of being the USSRs first female full-rank People’s Commissar ( p 107). She was more than Molotov's wife, though it was that which first gave a place at the top table. That Beria appeared in person to release her makes him sound rather gallant. Separately, we are told that she remained a convinced Stalinist and hated Khruschev (p 117). The context is this: immediately after Stalin’s death, Beria formed a ruling troika with Malenkov and Molotov; Molotov could easily have made his wife’s release a condition of his participation. The aim of the troika was to maintain the status quo. It was ousted in Khruschev’s and Zhukov’s coup of June 1953; Beria was executed in December 1953 and those now in power explicitly or tacitly agreed that with the death of Beria -  without question an evil figure -  they would henceforth stop killing each other. Beria was most definitely not gallant and Khruschev stopped not only Beria but Polina and her husband Molotov from carrying on Stalinist business as usual.

For me the most interesting part of the book was the reminders it provided of the vast army of foreign talent assembled in Russia before 1914, not only to develop Russia’s infrastructure and heavy industry (think, notably, of John Hughes in the Donbass) but to service the tastes of Russia’s most wealthy, the 1% who lived a life of leisure and ostentation funded by rents generated far away from St Petersburg or Moscow and ultimately based on the labour of an impoverished population.

Posted by Trevor Pateman at 06:23 No comments: