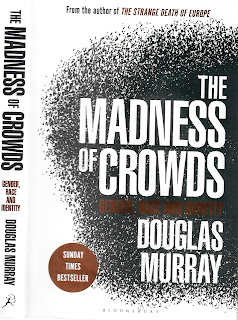 Very few, if any, societies have ever  arrived at a workable and sustainable consensus about how to distribute desirable scarce goods. The problem is exacerbated when the goods identified as desirable, notably money and fame, are inherently scarce because relative. If you extend the range to include, for example, happiness or virtue or wisdom - well, then things might get a bit easier. If you can identify goods where your gain is not necessarily my loss, so much the better. But for many people that’s a bit too subtle; their understanding is limited to zero-sum games: there’s a cake and any bit you get is a bit I don’t get.

A recent British Prime Minister, David Cameron, praised those who took the sharp-elbowed approach. If you want something scarce, then force yourself to the front of the queue. If you knock over an old lady on the way there, well, that’s life which is about grabbing what you can. President Trump agrees; he has grabbed many things on his way to the top and he will do whatever it takes to stay there - say, dirt on Joe Biden’s son as quid pro quo for US military aid.

I grew up at a time when it was thought that the distributional problem could be solved in a consensual way if societies operated meritocratically: you should get more of the desirable goods only if you in some way merited them. Talent, hard work, a track record of success were among the measures of merit. Race, Class, Sex were irrelevant. Though it was rarely articulated bluntly meritocracy was also a blatant alternative to inheritance; if you were really going to be meritocratic, then the House of Lords had to go and inheritance of serious wealth had to go too.

All general theories have their problems. At Oxford in the 1960s, one of my leftist friends reckoned it a problem deserving of serious consideration (his father in the wine trade), How should the finest wines be distributed after the revolution? Clearly, ability to pay would no longer be acceptable (or possible). Would merit work? Could you demonstrate through attendance at wine tasting classes that you had a  palate deserving of a Premier Cru? And so on through many rounds of drink….

Nowadays, no one is very keen on meritocracy. The favoured alternative is representation though no one has yet produced a definitive tome listing all the relevant parameters for who should be represented and where. I have tried to do the math, and once you move into multi-dimensional (intersectional) representation it is very  hard to formulate what would count as a situation in which it would be true that For all  values of the variables X and Y, X is fairly represented in Y.

But basically the where is fame and money and the who is specified in terms of a few identities: ethnicity (but how many ethnicities are there?) and sex and/or gender (with a lot of ongoing debate there: is the Board of Directors gender balanced if half are males by birth and men by identity and the other half women by identity but with male appendages still in place? Trans ideologists seem obliged to say that the answer to that is Yes).

Nobody seems much worried about class anymore because the working class, rather awkwardly, has its own identity politics: in the USA it’s Trump and in England it’s Brexit. The identity politics with which Douglas Murray is concerned is a middle class thing; it’s about access to money and fame.

For example, when (apparently Caucasian) Sierra Boggess was cast to play Maria in a production of West Side Story one objection on Twitter read “You are a Caucasian woman and this character is Puerto Rican. It’s not like you’re hurting for job opportunities. Stop taking roles from actors of colour”  (Murray, pages 142-43).

Well, to me that’s just an inversion on a standard working class complaint against immigrants They come here and take our jobs. In this case, Puerto Ricans having come to mainland USA (as US citizens, they have always had free movement rights) now claim back jobs which have been stolen from them. This zero-sum idea of theft is central to identity politics, most notably in the doctrine of cultural appropriation. Nobody supposes either that immigrants make jobs happen or that culture grows by appropriation. Human beings just seem to find positive-sum thinking too hard.

But there is more to contemporary identity politics than non-meritocratic competition for scarce goods. There is a strong sectarian or theological element with which Murray is largely concerned and against which he argues and where I find very little to disagree with. The hate-filled bullying behaviour of some young people who think they have virtue on their side repeatedly reminds me both of the American witch hunt tradition and of Jew-baiting on the streets of Hitler’s Germany. It is not the politics of the democratic Left; it has more in common with the politics of the worst Right - including an extraordinary degree of racism which Murray documents.

Leave aside the bullying, it is also the case that identity theologians secure their prominence - their five minutes of fame on Twitter - by finding ever-new impossible things for us to believe before  breakfast. Murray singles out what trans ideologists expect us to believe and makes a restrained case against, urging caution but also flagging up the ridiculous. Eventually I guess the impossible trans beliefs will go the way of the Holy Trinity; whether they know it or not, most of those who are still Christians are Unitarians not Trinitarians despite the residual efforts of England’s state church.

Meanwhile, the impossible beliefs are doing a great deal of harm, notably in university humanities and social science departments  which have cheerfully converted themselves into seminaries where nothing is studied or argued, and everything simply asserted and endlessly repeated  even if (as with Judith Butler’s prose) it is often confused or simply unintelligible.

I thought Murray’s book very well argued and surprisingly nuanced for a writer whose metatags (Eton, Oxford, Henry Jackson society, neocon, Leaver,  ….. the Spectator) are so unpromising. The book is perhaps at its most effective when he looks to Martin Luther King for a defence of what later came to be called Big Tent politics. The general idea should be to find things we have in common, not ways of endlessly asserting the desire not to be common.

*
Recently, I tried to write a memoir of my years as an Oxford undergraduate, both personal and political. As concerns the political, I arrived in 1965 as an eighteen year old member of the Labour Party who had very recently knocked on his neighbours’ front doors to secure the election of a Labour government; three years’ later I graduated as a supporter or even member (I think I had a card) of the Revolutionary Socialist Students Federation (which may or may not have had an apostrophe …). To put it anachronistically, during my three years at Oxford, I Woke.

But then trying to remember things I realised something which may now seem odd. However Woke I may have been - and this is not just true of me - that didn’t mean that you did not talk to the Unwoke (who were legion), did not debate with them, did not listen to them. And they reciprocated. It occurred to me, for example, that every week when he lectured, arch-liberal and critic of Marxism Isaiah Berlin pulled in a very full house and a significant part of that house was the Oxford Left which turned out in force, not to heckle or barrack, but to listen to the most mesmerising lecturer Oxford had on offer. I would not be pushing it if I said that when you took your place you looked around to make sure that your fellow lefterrati were there with you, rather as if you were at the theatre (which, of course, you were). If anyone had suggested that Isaiah Berlin should be No Platformed it would have produced bemusement or merriment. We had enough confidence in our own convictions not to need to suppress other people’s (and that may be one clue to understand where we have got to now).

It occurred to me that age might have made me rose tinted in thus presenting the Left as indulgently liberal so I looked for some external confirmation and found it indirectly in  - doyen of the Oxford Left - Tariq Ali’s Street Fighting Years, originally published in 1987 and re-issued in a 2018 version which I am using. He writes about his time in Oxford where by 1966 he was already well-known as an activist and trouble-maker. That does not stop the local Conservative MP,

Monty Woodhouse from embarrassing me on more than one occasion He used to stop me in the street and say “I am to the left of the local Labour candidate [Evan Luard - TP] on immigration, on Vietnam, on Rhodesia and probably also on economic measures. But you and your friends will be voting, I take it, for him” To which I replied that we were voting for parties not individuals and moved off rapidly … (page 138)

So it was quite possible for a Tory toff (later the 5th Baron Terringon) and a revolutionary toff to josh in a civil way with each other on the streets of Oxford - and for Tariq Ali to tell the story twenty years’ later in a way which does credit to his opponent.

It’s true that very shortly after, end 1968-early 1969, quite a few of us did place one limit on our tolerance - just one, and after quite a lot of debate which in my case made me very familiar with John Stuart Mill’s On Liberty. Mill argues that free speech loses its privilege when the circumstances of an utterance constitute it into an incitement to violence of some kind. He gives an example: you should generally be free to say that corn dealers are starvers of the poor, but not to address those words to an already excited mob standing in front of the local corn dealer’s house. On this basis, I concluded -  and argued in meetings - that it was legitimate to try to stop Enoch Powell’s countrywide stump of political speeches since they constituted an incitement to violence, unintentional perhaps but their effect clear enough on streets which were becoming unsafe for black people. I had no problems with the idea of Powell addressing, say, a university seminar - indeed, I had attended one that he gave in Oxford and I simply sat a few feet away from him and listened. I agreed with Mill: circumstance makes a difference.

The blind spot in my thinking was the rather too easy assumption that we could take the law into our own hands. On the statute books, incitement was an offence so why not appeal to the state (as people do now)? After all, the state had more resources at its disposal than we did. Equally, the exception made for Powell was arrived at with some hesitation and doubt; it was a last line of resort not the first choice as it now seems to be (Murray provides examples).