The English philosopher Roger Scruton has died at the age of 75. I always thought his books on art and aesthetics very good and assigned them for student reading. At the same time I thought his politics bad.  The review of his book Sexual Desire, republished here for the first time since its original publication in 1986, sets itself the task of driving a wedge between the philosophy and the politics. If I was re-writing it I would be more critical of a Kantianism which is too morally serious to accommodate the playful elements which are an ordinary part of human sexuality and that would open up a different and rather bigger wedge. But if a smaller one is enough to do the job, that's fine. 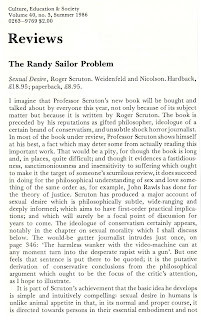 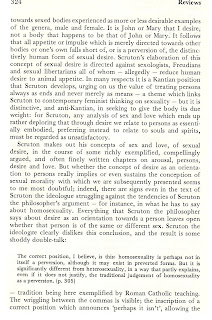 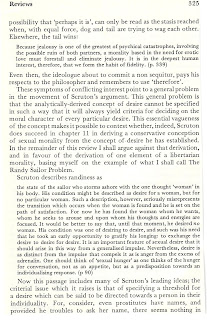 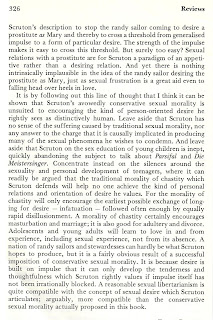 Posted by Trevor Pateman at 03:01 No comments: 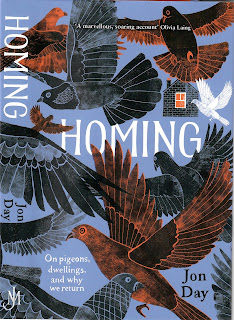 This is a book where the fascination is in the detail. But to make detail fascinating requires a great deal of sense and skill. Without those, a writer will simply get bogged down, followed in short order by the reader. Jon Day succeeds in the task he has set himself by making frequent back and forth switches between his family life, his pigeons, the long scientific backlog of research into pigeon homing, literary treatments of pigeons, the more general  themes of home and homing, and so on. In other words, he does not behave like a Victorian novelist who reckons that until you have done the local topography exhaustively you mustn’t switch to the next topic. (Those geography lessons might be regarded as antecedents of the modern academic article’s  literature review …).

I read the book because I have admired Jon Day’s work as a book reviewer, work in which he is unusually thorough and insightful. This book also has an understated thoroughness to it and plenty of insight. It’s a very patient book, as if the work of a master craftsman. It belongs to the booming genre of creative non-fiction which has proved a haven for university lecturers who have little enthusiasm for writing unreadable and unread academic papers but who do actually know an awful lot about an awful lot of things and would like to share the knowledge.

Jon Day is a King’s College London university lecturer in English who cycles off to work, to his job  down the road,  without making any fuss about it in these pages. But in the context of settling down and starting a family, he develops a passion for pigeon racing, builds a pigeon loft in his garden, joins his local club, and very soon starts to compete in the races which are at the heart of the hobby.

As I understand it, pigeon fancying was one of those elaborate, working-class pastimes which developed in mostly urban areas in the Victorian period and were pursued exclusively by men. Those men were often migrants from the countryside, like those agricultural labourers who left the land of East Anglia for the not so far away slums of East London, a shortish train journey to Liverpool Street able to completely change your world.

Like dog racing and gooseberry fancying, the pastimes developed an elaborate language, lore, and extensive organisational infrastructure. And like academic life,  they were highly competitive activities. So the camaraderie of the clubs was always infused with rivalries which might break out into hostilities. Jon Day is a relatively young (born 1984) London professional getting involved with the pastime at the end of its life. The working class life into which it fitted now barely exists, certainly not in London’s East End. The big factories have gone, the docks,  the warehouses, the printing works, the breweries (Brick Lane was once dominated by Truman’s vast working brewery; now it is only the shell which remains). He has read the pigeon breeding and racing  manuals which even though they may be over a hundred years old still guide the novice into the fancy, but one of the few things he doesn’t do in this book is situate his pastime in this social past. My guess is that he could do that well if he wanted to. Maybe the archives are there.

I am sure we are going to read a lot more from Jon Day; he is a very good writer. A quick search shows he has an academic book out in 2020. He has already published other creative non-fiction on the topics of cycling in the city and fishing.

Posted by Trevor Pateman at 02:20 No comments: 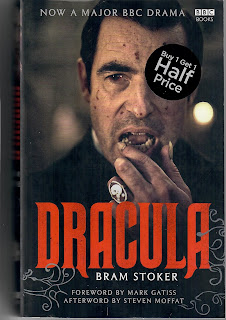 Posted by Trevor Pateman at 01:34 No comments: 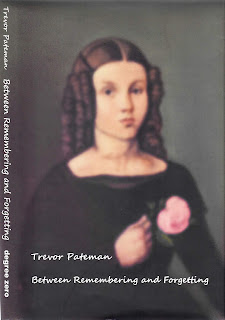 A linked set of twenty six essays exploring topics around individual and collective memory. There are discussions of the internet as  prosthetic memory; memorials and statues; oral history, notably in the work of Svetlana Alexievich; sentimental objects; forgetfulness as part of what enables both individual and cultural change. And much more ....

Enquiries to     degreezeropublisher@gmail.com   or     patemantrevor@gmail.com