Review: Eimear McBride, A Girl is a Half-formed Thing 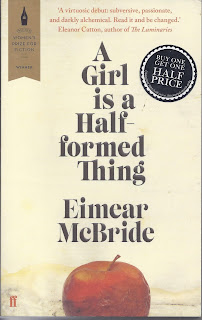 In most novels, the author leaves a trace - sometimes a very obvious one - of the imagined reader who has inflected the writing. In contemporary fiction, it’s quite easy to find novels which have been written with a film-director-looking-for-a-script lodged in mind. It’s very easy to find crowd-pleasing novels in which cardboard characters are put in to represent the “under-represented”, thus ticking at least one and preferably several current political correctness boxes. And, of course, it’s still possible to find books where the author is clearly worried about what their Mum might think.

Experimental prose styles, like those deployed in this novel and (for a relevant contrasting example) in Anna Burns’ Milkman, may be designed with an aesthete or literary snob reader in mind. More often, I suspect, they are ways of stopping any imagined reader from interfering with the story. The writer is determined to tell the story they want to tell, and the imagined reader can go hang. This often enough yields a commercially unpublishable novel, and did in the case of Eimear McBride’s book.

Even now, skimming the blurbs on the Faber edition, it’s quite clear that there is little inclination to talk about one half of the book. The novel is dedicated to the author’s dead brother and, indeed, the narrator in the novel tells at length the story of her older brother’s life-long illness and early death - the novel culminates with that death. Reviewers are comfortable with that. But half of the novel is about rough sex, about masochistic sex, and about taboo sex - narrated in detail and all of it (to simplify enormously) designed to fuck the narrator’s pain rather than to bring pleasure or closeness. The publisher’s blurb on the back cover of my Faber edition is really an extended trigger warning rather than an engagement with this half of the book.

I did read it right through, in short sessions. I can’t say I enjoyed it. In Milkman Anna Burns has an experimental style which carries the reader along and is the vehicle for a great deal of humour. McBride has a style which constantly frustrates the reader in their tracks, notably through the repeated use of full stops, of sentences which aren’t, and of depictions which are ambiguous or obscure - one isn’t always sure which. It is as if the text is shot-through with a great deal of static through which one has to try to follow the threads.

The threads are undoubtedly there, all the way through. The sick brother and the rough sex threads are tied together with an Irish Roman Catholic thread, which also perhaps deserves a trigger warning: there is a horrific scene of the neighbours coming in to sit round the dying brother’s bedside, help him on his way (pages 185-88).

All this produces a novel of unremitting intensity with very, very few intermissions. There are a handful of passages where the style changes. I noted these: page 92 where the mother is telling her daughter her woes; pages 173 - 74 where the doctor tells the brother that he is dying; page 197 where in the final sexual encounter the prose completely breaks down in a (let’s say) Joycean manner. It’s not enough. If I read the novel again (I won’t) I would look for more of these variations and any serious study would want to look at the use of stylistic change within the narrative.

I can identify with a writer’s need to keep out of their head the kind of reader who will frustrate the writer’s story and I can see that a difficult prose style is one way of doing that. But I would like to think that victory over the censorious reader, the prurient reader, the tiresomely correct reader, could be achieved with a style (or variation within a style) which is a little kinder to an actual reader. Equally, I can see that McBride's style is an attempt to convey the anguish of an inner world which any easier prose would tend to soften.

Email ThisBlogThis!Share to TwitterShare to FacebookShare to Pinterest
Labels: Anna Burns Milkman, Eimear McBride A Girl is a Half-formed Thing