Review: Isabel Hardman, Why We Get the Wrong Politicians 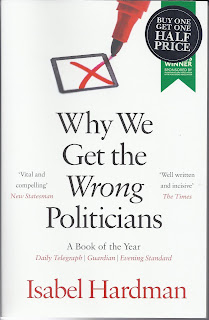 This is a hand-wringing book by an Establishment political journalist about Establishment politicians and Parliament. It’s readable, full of interesting anecdotes, and good in the parts which emphasise Parliament’s failures at what is supposed to be its job, legislation. The detail assembled there is worth having. The book pairs with the more academic work The Blunders of our Governments, by Anthony King and Ivor Crewe,  reviewed on this Blog on 11 June 2013 and mentioned several times by Isabel Hardman.

One book can’t do everything but three things are missing which bear on Hardman’s case.

First, the history. We may think of Parliament as sovereign in the UK, but technically it is the Queen in Parliament who is sovereign. That technicality is explained by a history in which Parliament developed as a creature of the Executive,  that Executive finally formalised as a Cabinet which constitutes Her Majesty’s Government, its head appointed (and still appointed) by the Sovereign. So Parliament developed as second fiddle, though by the 19th century it came to acquire more power than ever did the state Dumas of Imperial Russia. Its power expanded with the expansion of the franchise, but its members remained subject to Executive manipulation, the carrots of jobs and bribes, and later the sticks wielded by  government Whips. Theresa May’s billion pound bung for the votes of ten DUP MPs did not come out of nowhere. It was an ordinary exercise of Executive prerogative.

Second, the voters. Those who argued for the expansion of the franchise through the 19th and early 20th centuries twinned their case with a demand for the expansion of popular education so that voters would be prepared for their tasks as citizens. But the British educational system never got into the business of educating citizens; it stuck with God, the Queen and school uniform and still does. As social media have now made clear, if tabloid newspapers had not already done so, the result is that many “citizens” are not really up to their job.

Third, there is the long term decline of Great Britain, a decline marked by periodic adventures - Suez, Iraq, Brexit - which each time leave it a weakened power. The decline has now gone so far that one can reasonably speak of a failing state - Hardman instances several areas (for example housing and social care) where the state has ceased to cope with the demands created by demographic and economic change.

In failing states, politics does not attract all the talents; it attracts the crooks and the also-rans. When it comes to it those are people who can’t deliver. The Conservative Party likes to tell the story of Harold Macmillan who as Housing Minister in the early 1950s got considerably more houses built than his (talented) Labour predecessor - much or most of it, social housing. He did it with the benefit of what was still very much a war time command economy, it’s true, but he did it without benefit of computers or social media. Nowadays, you can be put in charge of Brexit, as was David Davis, and simply not turn up to work, throw in the towel - and still get invited onto state TV as if you might have something worth hearing about. Put in charge of negotiating trade deals, as was Liam Fox, you can end up able to show the Faeroes and Fiji and not much else; but you keep your job and continue to appear on state TV.

Email ThisBlogThis!Share to TwitterShare to FacebookShare to Pinterest
Labels: Anthony King and Ivor Crewe The Blunders of Our Governments, Isabel Hardman Why We Get The Wrong Politicians, Owen Jones The Establishment