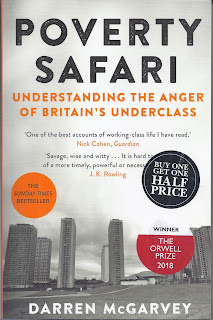 This is a good book which held my attention right through though some of it seems cut and paste from what could have been free-standing articles. But I think it is about something more than what it says it is about, and I think there is a fault line in the characterisations.

In any stratified class society which nonetheless permits some social mobility, then the more differentiated the strata the more anyone who is mobile (up or down) will find that they become strangers to the class they have left and never quite belong in the class where they have arrived. Especially in the last two or three chapters, Darren McGarvey is beginning to live with those consequences of his upward mobility, culminating for the moment in becoming an Orwell Prize- winning author and published by a London house which I guess insisted that though in Glasgow it might be all right to spell it  fucking down here it is spelt f**king. Welcome to the world of middle class values, here comfortably hitched to the values of American-dominated corporate publishing.

But the body of the book is concerned with what it is like to begin life at the bottom and, in many cases, to remain there. For Marx, the bottom stratum of society comprised the lumpenproletariat easily mobilised by the forces of reaction and less easily by progressive social forces. Marx had nothing good to say about the lumpen.  Others have called this stratum the dregs of society and beyond ordinary political help. Others again have called it the rough working-class distinguished from a respectable working class which, at a minimum, gets out of bed each day to clock in on time and doesn’t spend all its wages on drink. But since the Thatcher years in the UK which created what we now call the Benefits Culture, the rough working-class has more or less ceased to work, even casually or intermittently.

McGarvey’s background is at least half rough or lumpen, his mother a violent alcoholic and worse, dead from her addictions at the age of thirty six. He writes movingly about this. But he is coy about his father, who is never (unless I missed something) assigned an occupation but who is acknowledged as a source of encouragement - his father does not pooh-pooh Darren’s dream of becoming a writer, but actively encourages it. So I am going to guess that McGarvey’s father is the respectable half of a dysfunctional pairing. This is important.

Many years ago, for example, Colin Lacey in Hightown Grammar decided to ask the question, Why do some working-class boys succeed? rather than the question Why do most working-class boys fail? He discovered that in most cases of success you could identify a mentor or a sponsor who encouraged and supported at least some kinds of ambition. A typical case would be that of a mother who had married down socially, probably regretted it, and tried to redeem the situation by encouraging a son to push back upwards. D H Lawrence had described the scenario already in Sons and Lovers.

In the body of the book, McGarvey’s use of the term underclass obscures the important distinction between rough and respectable and the dynamic which exists between these groups who may often live cheek by jowl. The voice of respectability is heard very clearly at page 175 when McGarvey quotes the very, very left-wing Scottish militant, Jimmy Reid, addressing shipyard workers occupying their place of work back in 1971 and telling them that there will be no hooliganism…no vandalism. Yes, Sir!

Anyone with any sense acknowledges that not all social problems admit of a political solution. True, some problems are much less acute in societies which are more economically equal than the UK or the USA. This is the lesson of all the academic studies of inequality - Wilkinson and Pickett's The Spirit Level most notably. But for the problems of dysfunctional families and the cycle of deprivation which children born into them experience, there is no quick fix from even the most benign nanny state. As McGarvey repeatedly emphasises, there are problems for which you have to accept some responsibility yourself and deal with them as best you can.