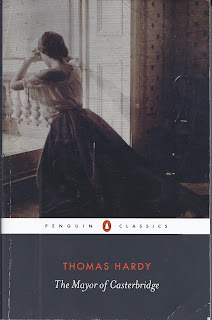 I recall as a teenager sitting hunched, gripped and tearful over The Mayor of Casterbridge. When I got to Henchard’s Testament on the final page, I was distraught. But I also felt that my own Will would read like Henchard’s and there was a masochistic pleasure in that.

I have re-read the book over fifty years later, starting with some trepidation. I really did not want to be reduced to helplessness. But I was curious to find out what had so moved me at fifteen or sixteen.

The writing surprised me. It was fast paced, not slow as I had expected. Things happen very quickly and I can see how that is because this was a novel written for serial publication. There are coincidences which we would find unacceptably implausible in a modern novel, stage exits and entrances occurring with pantomime artfulness.

I had forgotten that the novel is not only the tragic tale of Michael Henchard but also the tale of Elizabeth-Jane and it closes, after the Testament has been read, by settling her into some kind of happiness. But it may be that I had forgotten because Elizabeth-Jane had something in common with me as a teenager. Like many Victorian children, she is a replacement child. The original – offspring of Henchard and his wife Susan – died, to be replaced by the new version born of Susan and the sea captain Newson. In the Victorian period, children frequently died young and were often enough replaced by new versions bearing the same name. Hardy’s entire narrative about Elizabeth-Jane rests on the plausible fact – simply assumed in the narrative - that both she and her original bear the same name. I was a replacement child too, very consciously so for my mother, though I did not bear the name of the stillborn child who had preceded me. She would have been called Elizabeth.

Henchard has much in common with my father, whose meanness and aggression alienated both his wife and his son, alienations which he then resented and sought revenge for. So that also must have played its part in my teenage reading. Henchard is a less vengeful figure than my father, held back by the better side of his character which Hardy repeatedly emphasises. It is a requirement of tragedy that you do not feel that the victim  deserves their fate.

Though Hardy’s novel does not really have unity of time, it does of course have unity of place, and I guess that for some readers it is the descriptions of Casterbridge [Dorchester] and its rustic characters, decked in dialect and quaint vocabulary, which make the novel. But even then, some of Hardy’s authorial comments and asides are not without their contemporary relevance. The thought is attributed to Farfrae but is really Hardy’s when he writes of the skimmity ride as animated by The tempting prospect of putting to the blush people who stand at the head of affairs – that supreme and piquant enjoyment of those who writhe under the heel of the same …(page 295 in my edition)

Email ThisBlogThis!Share to TwitterShare to FacebookShare to Pinterest
Labels: Thomas Hardy The Mayor of Casterbridge