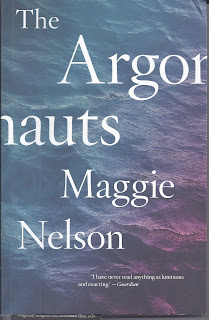 When you publish a book, anyone can read it and make what they will of it. That truth is strikingly demonstrated by Maggie Nelson when she reports that one of her previous books, about the murder of her mother’s sister, earnt her a middle-aged, male stalker carrying an attaché case who pursued her on to campus and qualified her for a security guard outside her teaching classroom. The handbooks don’t discuss that kind of writing block. Maggie Nelson mentions others, writing with very measured dry humour

The author writes  about her life in California, married to Harry who is F transitioning to M with the help of testosterone and a double mastectomy. Harry has a son by a previous relationship and Maggie Nelson gives birth to a son with the help of a sperm donor. The story is exploratory, well written, and concludes with an accomplished narrative which is split between her experience of childbirth and motherhood and her partner’s narrative of the death of his mother.

It may sound odd to say this, but in the past this book would have been written as a spiritual autobiography – there was a genre – and most likely it would have been decorated with passages from the Scriptures. Maggie Nelson’s story is iced with quotations from the usual modern theorists of identity, sexuality, gender and feminist theory – many of them French post-structuralist. I do wonder if they actually help or whether they will serve principally to allow the author to include this book in an academic CV. I have believed that the personal is political for fifty years. I'm still unsure about the personal is academic.

I have my doubts about several of the theorists she quotes – they write and theorise in a way which allows a cult to form but not for understanding to develop – and I only relaxed when she seems to come down strongly on the side of the plain language wisdom of D W Winnicott.

I had other doubts which relate in part to what I think of as American culture with its strongly fundamentalist inflections. America as we know it was the creation of rogues and religious zealots whose weakness was always to look for enemies rather than friends – the paranoid style. That style endures, both among America’s oppressors and America’s oppressed, and it leads people to dig in to positions which are elaborated and fortified beyond reason. You can end up with more rules than the Old Order Amish. Maggie Nelson is not immune, even though her book is well written, engaging and deals squarely with matters of the heart.

America also has a bad relationship with medical science. Americans pay more for less good care than people in many other countries. And because it is so largely commercialised, it remains as it always has been, prey to charlatans and quacks or, at the very least, to those who seek to persuade you that more medicine is better than less. In my mind, I am unable to extricate the narrative of Harry's transition from F to M from its medicalisation and I do fear that one day people will be saying that the medicine got it wrong. I hope not. In my case, my fear means only that I have a drawer full of prescription drugs which at one time or another I have decided not to take, sometimes wisely I am sure.