Review: Madeleine Thien, Do Not Say We Have Nothing 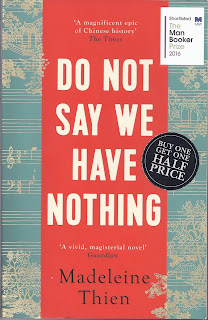 The 2016 Man Booker Prize was won by Paul Beatty's The Sellout which I reviewed on this Blog 2nd November 2016. Madeline Thien's much longer book ( 470 pages against 288) was short-listed. Both books will be challenging for most readers because they are written from inside specific cultures about which many readers will have only schematic knowledge. Beatty's is written from inside Black American cultures and Thien's from inside the cultures of  Western classical music and Chinese literary, musical and political life.

So I am sure I missed a lot reading both books but I ended up feeling that Thien's multi-layered historical novel is a much more significant work than Beatty's. She takes seventy years of Chinese history, a cast of characters in love with stories and music - and in the central cases, professionally engaged with Western classical music -  and she writes about the experience of civil war, The Great Leap Forward, The Cultural Revolution, Tiananmen Square,  Bach, Beethoven, Profokiev, Shostakovich and much more besides. The novel is not only panoramic but complexly structured and at times I had to check back when I lost a thread. I read the book slowly.

It has very clever aspects especially in the way it acknowledges its own partiality and incompleteness, just one among the millions of  stories which circulate in the world. It emphasises how things are lost but often not completely so that fragments remain, which may be greatly valued in themselves - a theme which I no doubt responded to because I make something of it in my own book Materials and Medium: An Aesthetics (2016).

There is an extraordinary, haunting theme about searching for lost others by leaving coded stories lying around the world in bookstores, libraries, on Blogs and websites.

The book is an extraordinary achievement. It must be out there at the limits of what a single writer can be capable of creating. Maybe the sheer layered complexity of the book put off the Man Booker judges. I just hope it wasn't the severe, critical narrative of Chinese political history since 1945 which deterred them.
Posted by trevor pateman at 02:26

Email ThisBlogThis!Share to TwitterShare to FacebookShare to Pinterest
Labels: Madeleine Thien Do Not Say We Have Nothing, Man Booker Prize shortlist 2016, Paul Beatty The Sellout, Trevor Pateman Materials and Medium