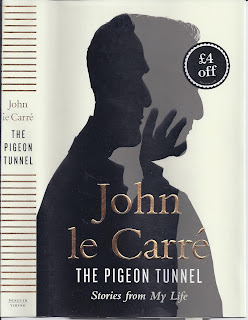 I started into this three hundred page book of thirty eight mainly short chapters just as I was finalising a book of twenty six short chapters which will take up a couple of hundred pages, next year with any luck. I am glad I did not read it earlier. The author knows how to tell a good story and tell it splendidly. Some of the stories are tragic, some are hilarious. Some of the stories exude a sense of “I’m old. Why not? Who cares? They're dead. So here goes …”  If I had read them sooner, I would have succumbed to last-minute influence.

My twenty six chapters don’t include a narrative of the only occasion (to my knowledge) when anyone tried to recruit me to British Intelligence. In 1972 I had found myself a job teaching Liberal Studies to day release apprentices – bricklayers, plumbers, panel beaters – in Devon. I was bent on subversion but in reality was simply making a mess of it and I knew I had to try to give some better direction to my life. I was twenty five now. So as a long shot, I booked in to talk to the Careers Adviser at the University of Exeter. I don’t know how I blagged that, since I had not studied there. But anyway, he interviewed me at some length, appeared to think for a bit, and then asked me if I had time to take an IQ test – he may have called it something else but to me he was just asking me to re-sit the 11+. I had no qualms about doing that and happily filled in the test papers behind a closed door, emerging to hand them over to my interviewer. He scored them at his desk and then drew out from a drawer a little brochure for GCHQ. Did I know what it was? Would I perhaps like to read it and think about it?

I was embarrassed; I felt sorry for him. Though I most definitely over-rated the non-existent threat I posed to National Security, I was probably not far off in thinking that it was as if he was proposing a police career to an amateur criminal, not the career kind of criminal for whom it would be appropriate. I was painfully reminded of the girlfriend who desperately wanted to be a real spy and who regarded me as one of the main liabilities to her chances of success; so she lied me out of existence, replacing me with the Double (who she was also sleeping with). And that was four years ago, since when some of my unsuitable friends had become even more unsuitable. I would have been curious to find out more about GCHQ but felt they would surely turn me away on first profiling and this decent man who had taken time out to interview me would be made to look a bit of a fool. So I politely declined.

Now if you liked that little bit of story you will surely like John le Carré’s book a whole lot more because it is full of much stranger encounters with much larger-than-life characters, most of them famous in their own right. He meets them all, if we are to believe him and I’m not sure I do, in the course of doing “research” for his next novel. But he does take a lot of personal risks, does do an awful lot of research, and why would you be doing that unless you were a spy? And don’t tell me it’s all about spying for your novels.

What I like a lot about le Carré is his politics, which are not easy to pigeon-hole. He is part humanist, part socialist and part what is (or was) occasionally called Tory Anarchist, an expression you will understand if you align it with Manic Depressive or as we are now supposed to call it, Bi-polar.

This is a splendid book, very easy to read, and full of surprises and strong feelings. (And I will let you into a secret: I don’t usually write sentences like that on this Blog).

*
In chapter 35, Carre tells a story dated to 1967 in which he helps to secure "leave to remain" in the UK for a famous Czech actor who has left Czechoslovakia legally but who wishes not to return and equally not to defect or claim political asylum, which would result in retaliation against the friends and family he has left behind. Carre taps a few friends for help and has soon got a polite letter into the hands of the Labour Home Secretary, Roy Jenkins,  and the rest is a history which Carre is able to narrate.

In the summer of 1967, aged nineteen, I was Chairman of the Oxford University Labour Club once a purely party outfit but now less so - my own Labour Party membership, acquired at the age of 16 had lapsed in 1966. In my capacity as Chairman (I think) I was asked to a house in north Oxford and introduced to a Czech student, a boy I guess around my own age, living in a cupboard-sized room with a girl who may or may not have been Czech but who does not figure in the rest of the story. I forget who asked me to visit or what was said, but  I was asked to help the boy stay in the UK and if I had to say now why he wanted to stay then I am prompted to say that he had done something political back home which put him at risk if he returned. But really I have forgotten, and maybe he just wanted to stay with the girl. Whether he had come out on a visa or clandestinely, I do not know. My effort to help consisted in setting up a Sunday morning meeting at the home of a Labour MP who lived locally, Robert Maxwell then resident in Headington Hall on the estate which housed his Pergamon Press publishing company. How I achieved this, I don't now know - this is of course before mobile phones and emails.Nor was I one of Maxwell's constituents - the voting age was still 21 and Maxwell was in any case MP for Buckingham.

We went along and I recall a grand reception hall with a harp on display. Then we were taken into a dining room with a vast and beautifully polished table. The boy sat on one side, me on the other, and Robert Maxwell at the top of the table. The boy's English was not very good and Maxwell soon turned to Czech and appeared to question him quite forcefully and at some length. At the end, Maxwell turned to me and explained that he had publishing contracts in Czechoslovakia and that he was afraid that the boy might be a provocateur, hence the questioning. Whether any promises were made, I don't recall and as to what happened next, I don't recall that either. That's the problem with trying to remember things fifty years later, at least for me it is.