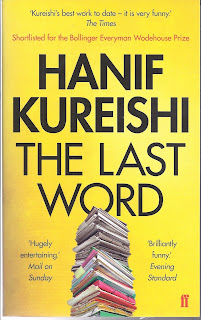 Refreshingly, and in defiance of the new norm,  Kureishi does not Acknowledge the help of any Facebook Friends.
Posted by trevor pateman at 07:49

Email ThisBlogThis!Share to TwitterShare to FacebookShare to Pinterest
Labels: Caitlin Moran How To Build A Girl, Hanif Kureishi The Last Word, My Beautiful Launderette