Review: Suki KIm, Without You, There is No Us 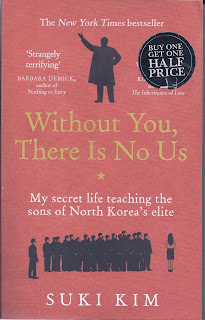 You couldn’t make it up. North Korea boasts one private university, the Pyongyang University of Science and Technology (PUST). It teaches  - in English and for free -  a couple of hundred male children of the North Korean elite, picked by the regime. The University is funded mainly by American Evangelical Christian groups and the teaching staff are mostly  Christian missionaries, who are however forbidden to proselytise. Go to Wikipedia to find out more about PUST (which you can do, unless you are in North Korea where Internet access is restricted to a very small group with usage monitored by guards).

Suki Kim, a Korean American born in Seoul, got herself a job at the University in 2011, shortly after it opened and at which time it was no more than a glorified English language school with its own new campus. She had her own agenda: not as a Christian, but as an investigative journalist and writer. This book is the product of teaching at PUST for two semesters. Her website contains a page defending the ethics of what she did.

This book is her strange diary of teaching in a strange land among strange teachers: the kind of fundamentalist teachers who won’t enter a Buddhist temple (page 211) or entertain the idea of letting students watch Harry Potter. (“filth” page 275).

Presumably, the North Korean authorities feel that they have something in common with American evangelical Christians and I guess they do: “mad” comes to mind quite frequently as you read this book. Both groups are intellectually isolated. Google to find out how many Americans believe that the sun goes round the earth or that human beings are the product of special creation.

North Korea is a country where over ninety percent of the population is kept hidden from outside eyes. They are impoverished, hungry,sick and afraid. They are at permanent risk of brutal punishment. They are –  Suki Kim uses the word – slaves. They do not appear in photographs.

What outsiders are allowed to see is a theatre – Potemkin churches (“Freedom of Religion”), Potemkin farms, Potemkin crowds – against a stage set of endless monuments to the Kim dynasty and endless socialist realist exhortations.

What Suki Kim encounters is a small group of elite students who know next to nothing about the world outside Pyongyang, but who are clever enough to know that they don’t know. They are naïve, sexually frustrated, and very very fearful. They operate exclusively in groups (though that is common enough among young men – think English football fans). They look alike and act alike. They are at least half mad.

It is difficult to see how North Korea can change. Except for the blanket of ideology which stifles everything, the relationship of the capital to the rest of the country is not so different to that found in mineral-rich African states, where the capital city’s wealth stands in total contrast to rural impoverishment. Except that North Korea has little by way of natural resources. The regime is propped up by the proceeds of crime, the proceeds of slave labour, foreign aid, and - as I now discover - Christian missionaries. There is no economy to speak of. What money there is goes into the military programme.

This is a troubling, very emotional (and probably flawed) book. It contains very little to comfort and a lot to disturb.
Posted by trevor pateman at 04:03

Email ThisBlogThis!Share to TwitterShare to FacebookShare to Pinterest
Labels: Blaine Harden The Great Leader and the Fighter Pilot, Suki Kim Without You There is No Us