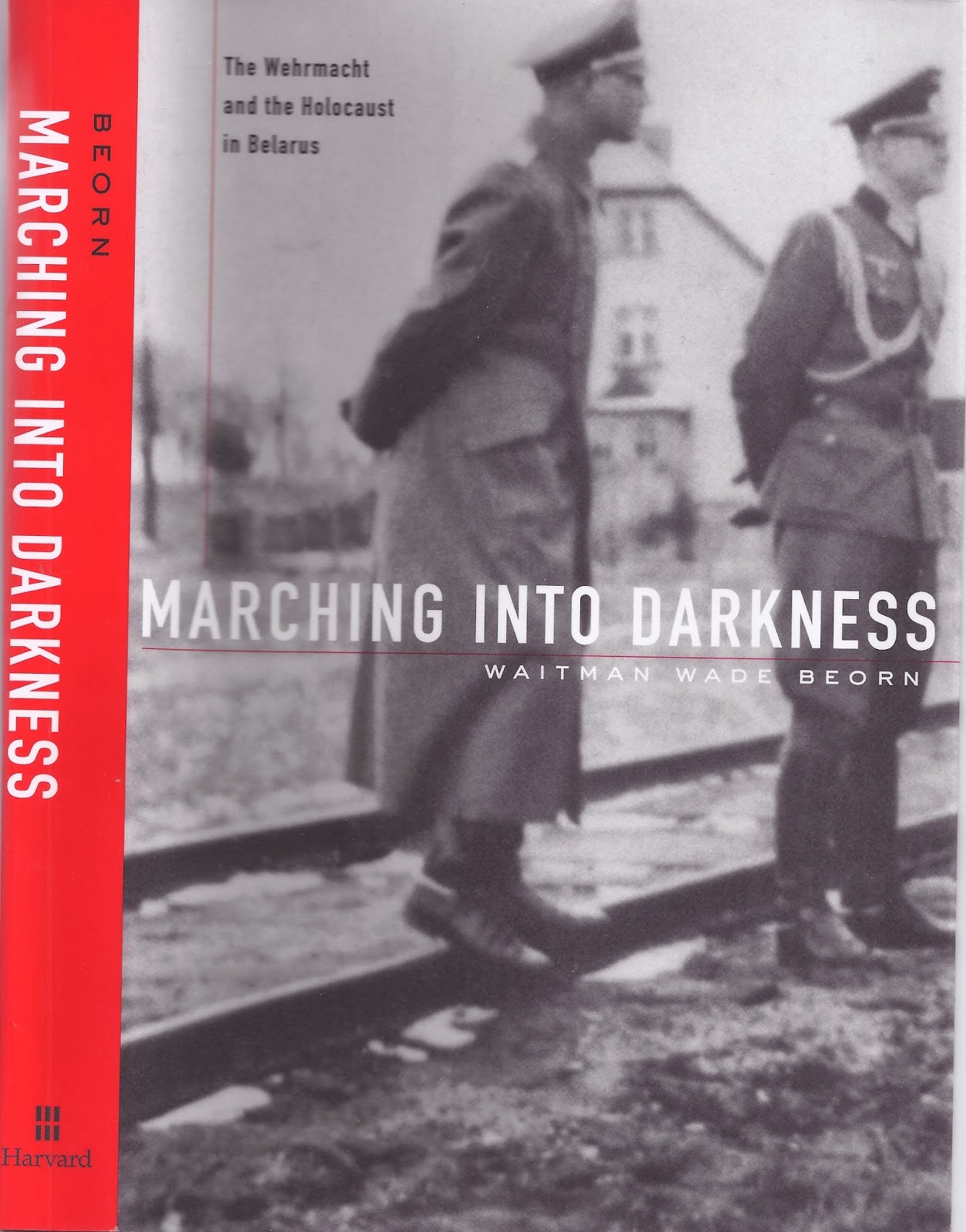 This academic study of the Wehrmacht and the Holocaust in Belarus is an exemplary work. It is clear, concise and meticulous in its presentation of primary material and balanced and open-minded in its evaluation and explanation of the events - the crimes - that it describes. At no point when I was reading this book did I feel that I was engaging with anything other than a thorough, patient and honest study.

Beorn's study looks at the early stages of the Holocaust in the Bloodlands of eastern Europe - the so-called Holocaust by Bullets which accompanied the German invasion of the Soviet Union in 1941-2 and which saw over a million Jews in the Baltics, Belarus and Ukraine shot either by Einsatzgruppen dedicated to the task or by units of the Wehrmacht. (By way of addition to the tally, of the three million Soviet POWs captured by the Germans in 1941 some two million were dead within a year, by starvation or disease or execution).

His specific focus is on the involvement in 1941-2 of regular German military units in village and town-level round-ups and executions of Jewish civilians in Belarus. These were units behind the front lines, initially responsible for administration of the civilian population until this role was partly or largely taken over by German civil administrative organisations and Nazi outfits.

He tries to show how Wehrmacht involvement in the killing of Jews increased and became routinised but was never completely unproblematic: there were unit commanders and individual soldiers who declined to take part (and suffered no subsequent harm) and there were others who dragged their feet or passed the buck onto subordinates. Beorn tries to tease out the factors which made soldiers and their leaders enthusiastic or reluctant to murder non-combatant civilians, including women and children.

If I have a criticism it is that though Beorn evokes it in various ways, he does not fully recognise that ethnic cleansing and genocide were embedded in European and other "civilised" cultures, right up to the 20th century. "Who now remembers the Armenians?" asked Hitler, referring to the Turkish genocide of 1915. And when German soldiers went Jew-hunting in the forests of Belarus in 1941, that was only a dozen years after the last "Abo Hunt" in Australia. (Hitler also referred to the extermination of Aborigines and Red Indians as a context for the grand Plan to clear the conquered Ostlands for new German settlers). One consequence of evoking the broader context is, unfortunately, to suggest that there is much less needing to be explained when it comes to looking at ordinary men as killers. They do it only too easily. That is one reason for always trying to avoid wars, even just ones, because your own side will certainly behave badly given half a chance.

At one point (page 242), Beorn expresses dismay and bewilderment that ordinary soldiers could (for example) package up the clothing of murdered Jewish children and ship it back to their own families. But just twenty years before, Red Army soldiers re-taking Ukraine and South Russia from Whites and Cossacks were doing pretty much the same. Their very large parcels home could be sent at special, cheaper Red Army tarriffs. Later, the post office documentation (with postage stamps affixed) which accompanied the parcels was retrieved from the archives and sold off for foreign currency through the Soviet Philatelic Association. You can find them now in collections and auctions. The same is true for their later German equivalents.

If you read this book along with Timothy Snyder's Bloodlands (previously reviewed here) you would have a very good picture of the eastern European killing fields where World War Two was fought out at its most horrific.
Posted by trevor pateman at 12:08