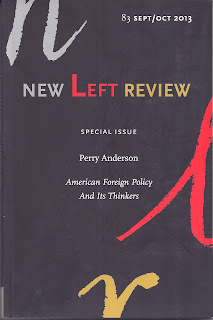 Though published as an issue of New Left Review, this 162 page essay is in effect a book and the book is in effect an extended - the word "magisterial" comes to mind - literature review. It's not a bad achievement for a man born in 1938. I couldn't sustain Anderson's level of engagement with many dozens of books - and I was only born in 1947.

It has typical Anderson features which used to irritate us when we were young radicals: so the section on actual US foreign policy is entitled "Imperium" and that on its theorists "Concilium". Latinisms, Frenchisms, Germanisms and even one Chinese-ism (page 140) appear throughout the essay - but only the last is glossed. I can see that one might want to show a certain internationalism or cosmoplitanism in the way one writes, but the italicised foreign phrases come across simply as the tics of a very literate man.

The United Kingdom is regarded by several of the US theorists Anderson quotes as a mere dependency. The boys from Eton and Oxford currently in notional power know what is expected of them and don't even have to be told. Anderson is the Other of Cameron and Osborne: like them the product of  Eton and Oxford, he is the lifelong critic of American power. At the outset, he was an outsider, identified by his long-term editorship of the London-based New Left Review. Now, and ironically, he is lodged at the University of California Los Angeles - not even a backwater university but a major institution of the Empire.

What is most interesting in Anderson's sober account of American imperialism is just how total American ambition is (or has been) and just how unashamed its theorists have been in conjuring strategies and tactics for truly global control. The military bases are world-wide - no other country has a fraction of what America has - and there is no part of the world where America thinks its intervention is off-limits. Anderson is particularly good in engaging in a quiet and balanced way with US strategists who could easily be written off as megalomaniacs or totalitarians.

For the USA and even under Obama, all forms of intervention are always on the table from cultural offensives (funded in the past by the CIA) through economic presssures (sanctions against Iraq, Iran and still - vindictively - Cuba) through modest military intervention to topple unco-operative leaders (too numerous to list and even to remember) to all out carpet bombing of people who won't obey (Vietnam).

I had no difficulty working through this valuable survey, not least because I felt that I was being made familiar with the thinking of dozens of theorists who I would not read at first-hand.

Posted by trevor pateman at 02:18 No comments: 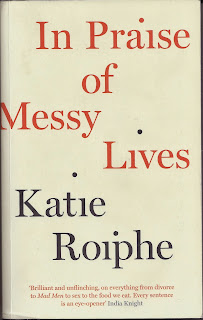 Posted by trevor pateman at 12:29 No comments:

Review: Anthony King and Ivor Crewe The Blunders of Our Governments 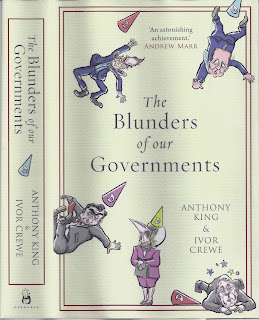 Any reader of the London-based satirical magazine Private Eye will be familiar with the substance of this book, despite the contrary claim of its authors (page ix). The book is a chronicle of British government incompetence over three decades - 1980 - 2010 - a period in which both Conservative and Labour parties were alternately in power. Both parties have major cock-ups to their debit accounts: the Poll Tax and the Child Support Agency (Conservative); the Private Finance Initiative for the London Underground and the National Health Service IT scheme (Labour). There are many others. All of them were chronicled, sometimes in depth, by Private Eye as they were on-going.

Despite the handicap of their Establishment status, King and Crewe do a very readable job chronicling failures of government policy, all of which cost the taxpayer money and many of which directly harmed vulnerable individuals (including people the policies were supposed to benefit). The chronicle occupies the first couple of hundred pages of the book. They do not even touch upon defence procurement or military operations, both disaster zones, confining themselves to civilian policy areas.

They preface the Chronicle with a disclaimer - something which is in their own terminology surely counts as a Prejudice. They say they are not trying to establish a "British outpost of the American Tea Party movement" (page xi). But why not? If governments repeatedly squander vasts sums of taxpayers' money, as King and Crewe claim that they do, fail to learn from their mistakes and blindly go on expensively proving themselves incapable of delivering the policies they promise to deliver, then it is surely a reasonable position to suggest that one solution is to give them less money to play with. Why encourage fecklessness?

King and Crewe consider such questions closed. It is not part of the way their group thinks. Instead, they devote a full dozen chapters to classifying and analysing why, where and how British governments go wrong and end up with expensive policy failures. These chapters are insightful, but King and Crewe are unable to identify any drivers of change which might push voters or politicians into changing a not-fit-for-purpose system. In contrast, it is quite clear that there are numerous stakeholders in a dysfunctional, sub-optimal system - for example, private companies who can rip off the state and politicians who know that they will be rewarded regardless of how may failures they achieve. John Prescott (to take an individual who they criticise by name) now sits in the House of Lords, despite having no identifiable achievement to his credit, and he is not alone: many of the individuals they have interviewed in the course of their research now have their knighthoods and peerages (page 450) regardless of whether or not in their careers they made a hash of things.

Some of their suggested changes could no doubt be acted upon by a reforming administration, but it is hard to imagine that increased accountability would be one of those changes. The only form of accountability which seems to work is the very, very crude electoral one. King and Crewe name and shame Gordon Brown repeatedly, and they characterise him in ways which ensure that you think he would have made a terrific 1950s American politician in the paranoid mode of that period. But it took the voters to get rid of him - and even then, and apparently without embarassment, the Labour Party invited him as the keynote speaker at the subsequent Party conference and gave him a standing ovation. Small wonder that some of us no longer vote.
Posted by trevor pateman at 11:38 No comments: