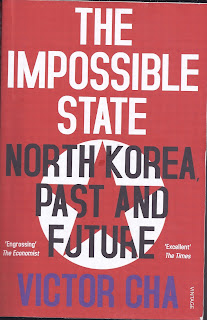 You need to get past two things in order to read this long (529 page) book.

First, the publishers don't employ a copy editor. As a result, the author is allowed to get away with cut and paste from texts written at different periods, producing most obviously paragraphs in which Kim Jong-Il is alive immediately followed by paragraphs in which he is dead. This runs right through the book and is jarring.

Second, the author was an adviser to the George W Bush White House, a fact of which he makes much use: there are eight sides of photos, two of which show images of the author with George W. Perhaps this just illustrates that very few interesting photos of North Korea exist, but I am not convinced.

There is much of interest scattered through a rather repetitive text and there is an overarching claim that, sooner or later (the author thinks sooner), North Korea will implode. That it hasn't already is due to the fact that it has been propped up since the Soviet Union and the successor Russian Federation pulled the plug on it in the 1990s. And so long as it is propped up, it won't implode.

So the question is this, Why has it been propped up? Cha identifies all the actors who have a stake in seeing the very unpleasant Kim family regime stumble on from year to year. And in effect he tells you what their stakes are.

Both South Korea and China dread a flood of starving (and emotionally disturbed) refugees coming across their borders. So they provide massive food aid to help keep people where they are - at the same time, disguising the inability of the regime to feed its population - an inability which has lasted now for twenty years.

China has additionally established an exploitative economic relationship with the North, extracting primary commodities (minerals) to supply some of its own insatiable needs. Often enough, it now treats North Korea like one of its own poor North Eastern provinces.

Russia has very small-scale aspirations to do the same thing, though using North Korea as a host for oil and gas pipelines and seaports. Russia's 12 mile border with North Korea could be made to work to Russia's benefit.

The other stakeholders, Japan and the USA, have ruled out military action to topple the regime and / or to denuclearize the country. Instead, they engage in interminable talks, where carrot and stick are used to try to contain the worst that North Korea can do. So far it hasn't nuked anyone, but it's the nukes which ensure that it is the subejct of repeated charm offensives - all of them chronicled in this book and some of them costing a great deal in terms of aid given.

So just as many small wars continue indefinitely because so many groups have a stake in their continuation, so North Korea has achieved the perverse position of being unwanted, unloved and bottom of every international ranking - and at the same time kept going by the actions of its regional neighbours and the USA.