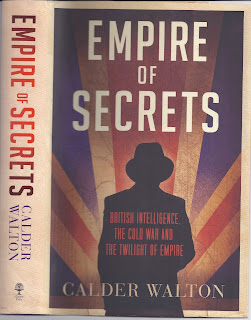 It took me a long time to read this 350 + page book. It's not a gripping tale, but the outcome of an academic engagement with the history of British intelligence begun at the University of Cambridge under the (doctoral) supervision of Christopher Andrew. (In the past Cambridge bred spies; now it studies them).

There is a focus - the role of British intelligence agencies (MI5, MI6 / SIS, GCHQ and so on) in the final decades of the British Empire when colonies turned into independent states. There is a thesis - those agencies often enough smoothed the path to independence and, despite everything (in some cases a Lot of everything), helped create at least a semblance of working relations between the United Kingdom and former colonies - working relations symbolised by the fact that most colonies on leaving the Empire chose to join the Commonwealth. But this does not create a single narrative. Rather, we are presented with a large number of thumbnails from which we don't get a feel for what the day to day operations of the Intelligence agencies involved. I feel I ended up knowing a little about a lot of colonial histories, including lots that I certainly did not know before.

In a couple of cases the thumbnails are quite expanded, as in discussions of the end of the Palestinian Mandate and the Mau Mau insurgency in Kenya and these were the most interesting sections of the book.

Walton takes some trouble to explain what distinguishes the Intelligence agencies of the UK from a secret police. The core criterion is the fact that our agencies do not have powers of arrest and imprisonment. Their job is to collect and analyse intelligence and pass it on - and in good time, if it concerns specific threats. MI5 which took the lead role in intelligence work in the colonies, worked very hard to get this model adopted in colonies becoming independent.

It helped that in several instances MI5 regarded local Nationalist leaders,like Kwame Nkrumah in the Gold Coast and Jomo Kenyatta in Kenya, as less threatening than did British politicians who in the 1950s saw Communists behind every instance of colonial unrest. This was not without bad faith: if Communists were to blame, then the United States would be more likely to accept repression as necessary in the Cold War context than regard it as an instance of outmoded colonialism.

In one important case, both American and British politicians convinced themselves - and despite Intelligence to the contrary - that a local Nationalist leader did pose a Communist threat. This was Cheddi Jagan who had the misfortune to be working for the independence of a colony - British Guiana - in America's backyard. So with  the help of CIA money and dirty tricks (and,basically, the CIA in the 1950s wasn't about much more than money and dirty tricks), Jagan was ousted from government and replaced with the puppet figure of Forbes Burnham - who went on to wreck his country's democracy and economy. (A bit like Robert Mugabe in Zimbabwe, who was seen by Britain as the "Best Bet" for a post-independence leader) .

Walton deals with the question of interrogation techniques and torture in British colonies, using documents which have only recently been allowed into the public domain. This provides a context, for example, to understand the recent court cases in London brought by former Mau Mau detainees. He also has some damning quotations ( Page 344) documenting  the British government's simultaneously racist and servile behaviour in clearing the inhabitants of Diego Garcia from their Indian Ocean  island home in order to make way for a giant  military base demanded by the Americans. In related discussions, he explain why in pre-Internet days Britain hung on to territorial outposts not only as places where warships could refuel or war planes could land and take off, but also as listening posts from which one could eavesdrop on other people's radio traffic. Cyprus provides a notable example and explains why we still claim the Freehold of part of the island  which in consequence is divided in three,not two as is usually thought.

Well, it took me a long time to read but I find I have had quite a bit to say about this book. And that does tend to support its claim to offer a study of topics previously little studied.