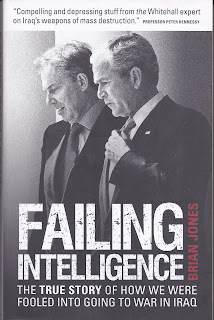 "We know that he [ Saddam Hussein ] has stockpiles of major amounts of chemical and biological weapons ..."

This book is at turns ludicrous and compelling. It would provide a very good basis for a seminar course on the "Whitehall" relationship between British civil servants and politicians and equally for a course on the organisation of British Intelligence activities.

Brian Jones was - until his early retirement - a middle ranking British civil servant on the Defence Intelligence Staff of the Ministry of Defence,  primarily tasked with analysing intelligence information on biological, chemical and nuclear weapons threats from possible enemies, including Iraq. Because he was located in the War Ministry, his immediate responsibility was to make assessments of Battlefield Relevance - what non-conventional weapons were or might be available for use against British troops in a given theatre of war and what precautions would need to be taken against them.

As a civil servant, he turns up at the office, works his hours, catches the train home, takes days off and goes on holiday. This routine is uninterrupted in the build up to the Iraq War and so quite often in the book he has to tell us that he wasn't there during such-and-such developments:


I was unaware of any of these events when I returned to work on Wednesday 18 September 2002. I was surprised to be told that work on the Prime Minister's dossier had dominated my staff's activities in my absence. 'All hell' had broken loose at the beginning of the month with the requirment for the dossier to be written and published within three weeks (page 79)


With the benefit of hindsight on a reckless and catastrophic invasion of a country which posed no actual threat, this reads as ludicrous. But it marks one of the differences between a civil servant and a politician who would never say, "Well, it was my day off when that happened".

Brian Jones also comes across as a pedant and a bore - but that's how it should be, That Was His Job and he did it conscientiously. On the evidence available to him, he was - like the German Foreign Minister, Joschka Fischer, who famously said it to Donald Rumsfeld's face - unconvinced. He is at the opposite pole from Tony Blair, whose sense of divine mission allowed him (and not just in relation to Iraq) to be careless of detail and too fast to judgement. At one point, Jones rightly remarks that he thereby risked failing in his Duty of Care to British troops - not to expose them recklessly to danger.

It also places Jones at odds with MI6, the most politicised of the intelligence agencies, which - on Jones's and other accounts - saw its task as to help the government of the day succeed in making its case for its war policy and for rallying support (including Parliamentary support) for participation in the American invasion of Iraq. Hopes of personal career advancement clearly influenced some individuals involved. Jones summarises the conflict on page 206 saying that his own department [ie, it's boss]:

It is in this area that there are some really interesting insights into the complexity of the relations between intelligence gathering, intelligence assessment (is it reliable? and so on), intelligence analysis (building up an overall picture) and political judgement (what shall we do with what we know?). The whole business reads like an advanced course in Modal Logic, seeking to clarify the relationship between possibly, could, would, might, may, probably, certainly ...

Two ministers in Tony Blair's government resigned in order to oppose the war against Iraq: Robin Cook and John Denham. Elizabeth Wilmshurst at the Foreign Office resigned in order to avoid being party to the War Crime of aggression (she isn't mentioned in this book - her resignation letter can be found online). Dr David Kelly gave unauthorised briefings to journalists and committed suicide. Brian Jones wrote a Memo. to his boss (who was furious that he did) and as a result ended up a public figure and author of this book.
Posted by trevor pateman at 02:05