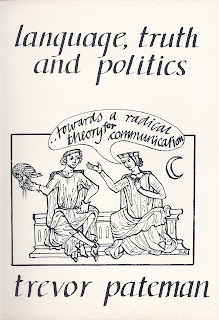 I wrote this book forty years ago. It was typed and re-typed in a rented thatched cottage in a Devon village: I had a job in a nearby college teaching "Liberal Studies" to apprentices - bricklayers, plumbers, hairdressers - on Day Release. I was 25 and just back from a year studying in Paris.

The book is what I wrote instead of the Ph. D. I was supposed to. After graduating in 1968, I was awarded three years' State funding for doctoral work at University College, London. I had a Supervisor - the late Professor Richard Wollheim - and eventually a thesis title, "False Consciousness". But after two years I gave up, found a one year Temporary Lectureship at the University of Sussex, and then (on a Leverhulme studentship) went to Paris  where Roland Barthes (notionally) supervised a (notional, never-submitted) dissertation on Waiting for Godot.

All the time I was working quite hard and sometimes very hard on notebooks, essays, seminar papers and lectures, eventually re-worked into this 1973 book. Re-reading it for the first time in years, it's clear I was never taught (and never bothered to learn) the Harvard system for referencing. Each item in the Bibliography is presented alphabetically but also numbered, from 1 to 127. So every time I had added something to the Bibliography, every reference after it had had to be re-numbered.... only an obsessive would fail to switch to a better method. But it does add to the auto-didactic feel of the book, a feel I probably wanted.

Despite the fact that I was familiar from 1968 on with the contemporary Women's Liberation movement, I simply did not have the imagination to realise that "he" can be replaced by "he or she" or "they" - nor that "People" is a very serviceable substitute for "Men". Despite this, the book - when it was eventually published in 1975 - got a generous review in Spare Rib.

The book presents itself as a Handbook or Manual with Practical Intent. The stated aim is to provide something Useful to those engaged in left-wing / radical / revolutionary "Consciousness Raising" or "Political Education". The stated assumption is that this work is going to be hard work because the "False Consciousness" of the workers / the masses is much more complex and deeply embedded than has  been assumed. Here I took my cue from Herbert Marcuse:

Repulsed by the concreteness of the administered society, the effort of emancipation becomes abstract, it is reduced to facilitating the recognition of what is going on, to freeing language from the tyranny of the Orwellian syntax and logic, to developing the concepts that comprehend reality ... where the mind has been made into a subject-object of politics, intellectual autonomy, the realm of pure thought, has become a matter of political education (or rather: counter education)                                                      (From the 1965 essay, Repressive Tolerance)

Today, I read it as the work of someone taking a very large hammer to crack a probably non-existent nut. Revolutionary uprisings, major social upheavals, are not the result of the determined consciousness-raising activities of book-in-hand activists from the local university. Discontinuous social  change - itself something rare - is the product of complex conjunctures which always take by surprise those who think they have seen the future. None of us (for example) ever foresaw the disintegration and dissolution of the Soviet Union.

This is partly because our knowledge of the Soviet Union, as of the Warsaw Pact countries, China and Cuba was minimal. Appallingly so. Read my book and you will see that I was simply not curious about these regimes. At the same time, it's clear that I felt that if only they understood ...the working class / the masses here - next door to me in my Devon village - would rush to change the economic and political order under which they lived.

Forty years on, it looks as if I believe that they're never going to understand. I don't ever watch TV, listen to the radio, vote, go to meetings or demonstrations. I read quite a lot, write a bit and publish it on the Internet for free. That's it.

Language, Truth and Politics originally appeared in an edition of 2000 copies which quickly sold out. It was extensively and generally favourably reviewed. A second edition with Second Thoughts and even more cumbersome numbering (subscripts!) appeared in 1980 and never sold out. Both editions were self-published in co-operation with my then partner, Jean Stroud. The cover of the first edition, shown above, was designed by the poet Denise Riley.

___________
* An anecdote: when I was in Paris, Roman Jakobson - by then an old man - came to lecture at the Collège de France. The hall filled up well in advance. A short man, well-dressed and with fine silver hair, stood up in his seat near the front, right  through the time in which we were waiting for Jakobson to appear. It was Lacan.