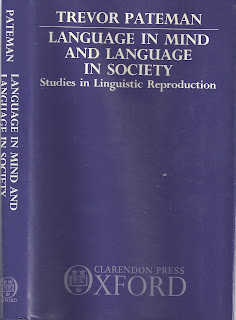 This is a book about Nature and Culture - and about the Mind as the place where both can be found.  It's focussed through a close engagement with language development in individuals and language change in their societies. It seeks to defend a specifically Chomskyan project and a broader cognitivist project against philosophical objections - such as  those of the Wittgensteinians - which dispute the very possibility, the coherence or intelligibility, of such projects. It's an academic work, short (174 pages of text) and at times so compressed that you probably need to have beside you whatever book or article is under discussion: quite often, not much more than page references are given - the author rather assuming that you will know what he is talking about. At worst, there are footnotes which should be chapters.

I wrote this book starting in 1978, included some of it (along with other material on Pragmatics) in a doctoral thesis accepted in 1983, and finalised it in 1986. Oxford University Press published it in 1987 in an edition of 1000 copies. There were quite long reviews at the time, mostly positive, but there was never a need for a second print run.

It's the most academic of my book-form publications and, I guess, very academic even if it reaches out towards some very general claims. Writing it exhausted me, mentally and emotionally. I kept this stuff in my head for eight or nine years, expanding and revising, draft after draft. I read into subjects where I had no previous background, some of the material more technical than I was equipped to cope with. The Bibliography is pretty impressive.

The overarching theory developed takes its start from Heraclitus, "All things change" [ Panta rei]. However hard those entrusted with the task may seek to stop change in a society's culture - and specifically its language if it has one - they cannot succeed. That is a consequence, really, of just one thing: the way the Mind works.

New entrants to a society - children - develop a language before they know what they are doing. It just happens and the mental course it takes is partly ring-fenced against (premature) attempts at teaching and training. As far as a young child is concerned, the plural of sheep is sheeps and for a long time you will try to correct in vain. Language grows in the child and the mental resources which make that possible also determine that every language grown is at the same time broadly similar to others in local use - enough so that the child can be understood - but also at least a little different, so that adults can feel that there are things to be corrected. (Such correction is not offered in the interest of understanding; you can only offer to correct that which you have already perfectly well understood).

But even if the child could pay attention to advice and correction and wasn't programmed simply to disregard such well-meaning stuff, the mind of adults is simply not up to the full magnitude of the task of correction. They simply cannot formulate, articulate and hold in their heads the rules of the system they are trying to protect from error and change. On some fronts, maybe they are quite good. On others, such as the sound system of their language, they are hopeless. The way words are pronounced, the intonation pattern of utterances - these are things which change all the time and generally below the threshold of awareness. Even when noticed, changes are impossible to characterise and manage as they are happening. Time passes, children find their way into roughly the right ball park quite effortlessly and - as far as sound patterns are concerned - what they develop lasts a life time. But their own children will in turn find their way  into a slightly shifted ball park, and so it goes on.

If our Minds were less powerful, our Cultures would be less rich - indeed, utterly impoverished if minds worked the way Jesuits, behaviourists and Wittgensteinians have imagined. Because our minds are so powerful, our cultures constantly change. Over a long enough period of time, a continuous chain of transmission - generation to generation - yields a population which could not understand its ancestors even if they could speak to them. Cultural transmission is always a game of Chinese Whispers. All things change.

But it is not Mere Anarchy which the Mind looses upon the world. True, the evidence a beginner encounters underdetermines the conclusions to be drawn from it - just as philosophy of science has taught us (Peirce, Goodman, Quine, Kuhn ...). But the beginner is not open to all possibilities logically compatible with the evidence. This is fortunate. We are born with a bent to understand the actual world in which we find ourselves. It was Charles Sanders Peirce who seems first to have said that and realised its importance. Give us a limited amount of evidence and an inference is triggered which lands us in more or less the right place.. The child gets the hang of the language being used around it very quickly, really without trial and error and certainly without an exploration of logical possibilities. Whatever it is that children do, most of the time it isn't learning from their mistakes.

And if there is no language around, the child has enough mental capacity to generate one: this is the evidence from creolization (Derek Bickerton) and from the home sign-systems deployed by the deaf children of hearing parents (Goldin-Meadow and others). Mind as part of our Nature is a formidable device. It allows us to find a way of expanding our communication with people who haven't found much of a way of communicating with us. Tough - for Wittgenstein and his High Church followers, seeking only the child's Obedience to the Rules of which they are the Masters - but true.

But is Mind as part of our Nature more formidable than our encultured Mind, the Mind into which Culture (and, on some accounts, only Culture) has entered?

That question is premature. First, we have to do the science. And we can only do the science domain by domain. If you want to look at a domain other than language, then a good one is drawing. Here it is wonderfully easy to show cross-cultural universals in the development of children's drawing which for some considerable developmental period goes its own (charming) way independently of the adult cultures practised around it. In order to draw, children draw on their Natures. All Culture has to supply at this point is a crayon and a sheet of paper. You can give them to blind children and (as I understand it) the results are not very different. That blind children can't see doesn't mean they can't draw - anymore than it means they can't play football.

In contrast, if you want to look at a domain more favourable to the claims of the Enculturists - people who believe that our Minds are filled with Cultural stuff and nothing but Cultural stuff - then Arithmetic might be a good choice; it is the one which Saul Kripke used in order to mount his Wittgensteinian critique of Chomsky and cognitivism.

But even here it seems that children cotton on to the idea of counting well before anyone sits them down to learn their tables. Recently, I was playing a little game with my granddaughter, aged 15 months. I said "Beep", she smiled and replied "Beep", and I smiled and replied "Beep". As you can imagine, this can go on. Then it occurred to me to say, "Beep Beep". She hesitated a bit but came back with "Beep Beep". Do you count that as counting?

The science will get better as we find more precise ways of describing "higher" level mental activities, open to introspection and reflection, and "lower" level activities or processses which go on below the level of conscious awareness and are known (indexically, symptomatically) by their consequences. Sometimes the two levels come into conflict: even when we have been told that the Müller-Lyer lines are of equal length, well, they still look unequal. Being told makes no difference ; it's that thing teachers fear most, water off a duck's back.

Finding the right way to theorise all this is hard - my book reviews some fairly technical discussions in the Philosophy of Mind (Fodor, Burge, Stich, Kripke and others) which grapple with the problems which arise when you try to ascribe mental states to an individual without making essential reference to the community, the culture, in which they live.

"All things change". Children bear the burden of my argument in support of this claim. So it's perhaps not surprising that the Epigraph for the whole book is a (heretical) remark of Walter Benjamin's, "Children are Representatives of Paradise".