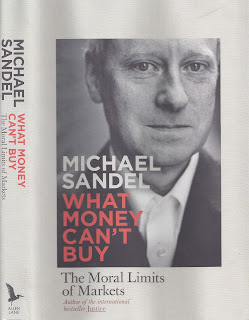 Posted by trevor pateman at 00:20 No comments:

I haven't reviewed any books recently - I have been giving up on books half way through and therefore -  under the terms of this Blog - cannot review them. This is true of Joseph E. Stiglitz's The Price of Inequality (Allen Lane 2012). I kept comparing it unfavourably with Richard Wilkinson and Kate Pickett's The Spirit Level: Why Equality is Better for Everyone - a book which Stiglitz does not mention.

The problem with Stiglitz's book is not its argument - which relates only to America - but in a decision to consign all the evidence to the footnotes. There are 290 pages of text and over 100 pages of footnote citations and discussions. This leaves the text uncluttered, but - unfortunately - dumbed-down and repetitive. I gave up.

But this is not at all to deny that growing inequality in America, combined with the weakness of the political system,  is a problem for us all and could become a pressing problem.  America surely cannot for long escape its own Arab Spring. Its rent-seeking (Stiglitz) or, as I would put it, extractive elites (the 1% who own and rule and don't pay taxes) have no intention of conceding any ground - indeed, they are still pushing for even more favourable treatment. And their grip over the media, the political process and the legislature has disillusioned citizens where it has not simply disenfranchised them. That is a recipe for civil disorder not orderly political renewal.

Wilkinson and Pickett's book contains many graphs correlating different kinds of Inequality with different social and economic measures. On most of those charts, the USA is an outrider - it has more Inequality and it has worse performance on measures of employment, health, security - you name it. It is never anywhere near the average. Some of those outrider figures surface in Stiglitz's book. We may in a sense already know it, but it is still shocking to read - for example - that "roughly one in three black men will spend time in prison in his lifetime" (page 70). That's a Gulag-like statistic and no society which achieves that outcome can be other than dysfunctional.

Here in Europe, serious newspapers and their serious readers looked at the Republican primaries with jaw-dropping disbelief. How do these nutters get to be front-runner Presidential wannabes? And when Romney finally emerged as candidate, the sigh of relief was quickly replaced by the fervent conviction that No Way, No Way do we want this man to become US President. That would be true across the political spectrum. Even the Conservative Party guardians of Britain's "Special Relationship" with the US pray each night for an Obama victory.

To tell the truth, they pray because they are scared. We are all just a bit scared and become a bit more scared every time some strange Congressman holds forth on Abortion or Evolution or Rape. These guys are Fundamentalists and they are Dangerous, make no mistake.

Whether they are scared in China, I do not know. But in China they are watching America carefully. It is only Chinese money which prevents America's financial implosion. If you think Greece has got problems, look at America's federal budget or its trade balance.

And back of it all, we know that America's war industry is lobbying for another War - and Romney knows that, if elected, he will have to give them one. It makes money and it makes jobs. That the War will be lost, just like those in Iraq and Afghanistan, is of absolutely no concern.

Posted by trevor pateman at 11:30 No comments: