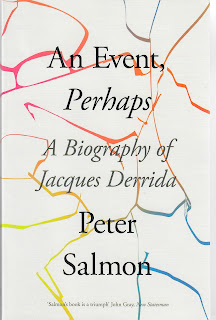 I am one of those people who would rather read a book about Jacques Derrida than read a book by Derrida. This one, though very well-written and diligent, isn’t going to change my mind. Derrida is just not my cup of tea - a phrase which the late Richard Wollheim used at the end of a superb essay on the work of Jacques Lacan which had involved him in a great deal of diligent reading. Nonetheless, I must have picked up something and not so long ago cheerfully titled an essay “Social Construction Deconstructed”. But then there is a generic use of “deconstruction” which is almost certainly not faithful to an original idea. To use the term doesn’t make me one of the (dwindling) band of the Derrida faithful.

When I arrived in Paris for a year’s graduate work in the autumn of 1971 I promptly spent most of my money on a pile of books by celebrity theorists of the time, intending to read them all. I bought Derrida’s De la Grammatologie and L’Ecriture et la Différence, both published in 1967, and  probably read half of each book - I don’t have the physical books any more so I can’t be more precise. But the material seemed at a distance from my more immediate concerns at the time and I didn’t finish them or do anything with them. Nonetheless, I found my way to the Ecole Normale Superieure and sneaked into Derrida’s (very sparsely attended) lectures in which he was offering a close reading of Hegel on the family and marriage, and that was even less of concern to me. So I stopped going. Salmon’s book (p. 166) tells me that those lectures were the basis of his 1974 book Glas. It was common practice in the Paris of the time for professors to use draft chapters of next year’s book as their teaching material. I stuck with Foucault for the whole year and he was working on his Pierre Rivière study and presented work in progress in seminars. But his approach was different, and it was much more of a teaching situation that he created, not least because he had dissuaded the tourists from attending: at the Collège de France all teaching was supposed to be open to anyone and Foucault devoted his first session grilling those present about their motives for being there. The grilling was severe enough to reduce numbers substantially at the second session. From Foucault, I got the idea of studying minor or parallel thinkers alongside  major figures and  a few years later writing about John Stuart Mill  tried to show how part of his system of thought had been more fully fleshed out by the more or less forgotten Sir George Cornewall Lewis. Likewise, I sought to show how you could make sense of Rousseau's arguments in Du Contrat Social by putting them alongside Condorcet's work on probability theory and majority voting.

Later, in the 1980s when  teaching at the University of Sussex one of my colleagues was Geoff Bennington who has now devoted a lifetime’s talent to promoting Derrida’s work, initially by translation and then in many other ways including direct collaboration with Derrida. There was an occasion when  I complained that Derrida was an improvisatore and  Bennington replied “I think he’s the bee’s knees”. I had put Derrida into the same category as Lacan, whose “seminars” (attended by hundreds at Saint Anne) were theatre in the tradition of Anton Mesmer and, by this stage in his career, more or less unintelligible. He entered each week wearing a fur coat; a female assistant helped him take it off and held on to it for the duration. In stark contrast, I greatly enjoyed the patient and relaxed seminars offered by Roland Barthes, who was my director of studies.

I made one more attempt to engage with Derrida’s work in 1997 at a Colloque held at Cérisy la Salle in Normandy devoted to Derrida and the topic of L’Animal Autobiographique. Derrida spoke at length, uninterrupted, and certainly for longer than Fidel Castro’s record. I found it exasperating. Peter Salmon now tells me that Derrida “presented a ten hour lecture” (p 273). It certainly felt like it.

Unless you are very stupid, then if you spend your life writing eighty books (Salmon’s figure for Derrida) then you are more or less bound to say something interesting somewhere. But I’m happy to leave it to others to discover where.

Email ThisBlogThis!Share to TwitterShare to FacebookShare to Pinterest
Labels: Peter Salmon An Event Perhaps A Biography of Jacques Derrida