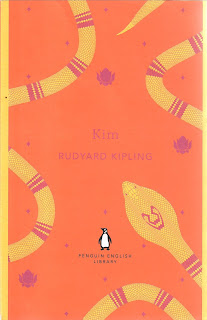 This is a wonderful novel.

I had never troubled with Kipling before and doubt I could quote accurately a single line of his verse. So I came to this book with only the prejudice that it was likely to be some imperialist tale. But apart from its formal or official framing as a Great Game story, it’s not.

It’s a lyrical novel which celebrates India, land and people - and since it was published in 1901, “India” includes Pakistan and the settings are mostly in what was then the North West and North. It’s also a lyric to its principal characters: the Red Hat lama questing south from his Abbey of Such-zen; the Frontier horse dealer and government agent, Mahbub Ali; Hurree Babu, the man of many parts (some of them over-learnt from the Sahibs); the talkative dowager Maharanee of Saharunpore, careless of her veil but not of the duty of care to others; the enigmatic Woman of Shamlegh, betrayed by the Christians; the small cast of Sahibs playing the great game - Creighton Sahib, Lurgan Sahib; and, of course, centre stage, Kim.

You could say that the lyric to the characters is romanticised; it’s true that Kipling foregrounds the best in nearly all of them. He draws the line only in relation to three minor characters: the unspeakable, nameless pair of Russian spies who appear towards the end and who consign themselves to outer moral darkness with their every word and deed; and earlier on in the novel, the Anglican army chaplain, the Reverend Bennett, whose bit part it is to pose a threat to Kim’s future growth and development - he would send him to an English orphanage - and who is characterised with what I can only describe as relentless venom.

The youthful Kim, no more than a street urchin, struggles with his English - much less fluent than his Urdu - to tell that he is the lama’s chela [disciple] and that:

“…we must find that River; it is so verree valuable to us”

“But this is gross blasphemy!” cried the Church of England. (p. 96)

Kipling hates Bennett and his prejudices. I read the characterisations, eyes agog, wondering what effect they had on early readers.  And perhaps especially when laid beside Kipling’s small sketches of native women, politely described as “courtesans” and “dancing girls” and about whom he is always positive. They are women of good heart, and that is what matters:

“Naturally, for he was never trained to consider them in any way improper, Kim had passed the time of day with one or two frivolous ladies at upper windows in a certain street, and naturally, in the exchange of compliments, had acquitted himself well”. (p. 130)

The main characters are lax in ways which the Reverend Bennetts of this world would find intolerable. Even the lama, questor after the meaning of life and triumph over the Wheel of illusion, will stretch a point for the Maharanee: she talks too much but she has a good heart and so it comes to pass:

“But I would ask thy Holy One….a charm against most lamentable windy colics that in mango-times overtakes my daughter’s eldest. [As an aside to Kim] Two years back he gave me a powerful spell.

“Oh, Holy One!” said Kim bubbling with mirth at the lama’s rueful face.

In case you were (ever) inclined to see the lama as a crusty old bachelor rather too preoccupied with his Quest, Kipling definitively humanises him in just a couple of lines.

There are other variations on this theme, of which I find the most beautiful this expression of love which Mahbub Ali, the horse dealer, addresses to Kim:

“Thou art beyond question an unbeliever, and therefore thou wilt be damned. So says my Law - or I think it does. But thou art also my Little Friend of All the World, and I love thee. So says my heart. This matter of creeds is like horseflesh …..manifestly a Kathiawar mare taken from the sands of her birthplace and removed to the west of Bengal founders - nor is even a Balkh stallion … of any account in the great northern deserts besides the snow-camels I have seen. Therefore I say in my heart the Faiths are like horses. Each has merit in its own country”. (p. 154-155)

I reckon you could call it a stroke of genius to insert that little note of hesitancy - or I think it does - into a horse dealer’s theologising with the aid of what is to hand, the horses, which are his things good to think with. As for the actual words, imagine them spoken, slowly and deliberately on stage.

Much later, at the end of the tale, Mahbub is touched by jealousy at Kim’s role as the lama’s disciple - Mahbub has known Kim since he was ten years’ old. The conversation then goes like this:

“I am not altogether of thy faith, Red Hat - if so small a matter concern thee”.

“It is nothing” said the lama.

"I thought not. Therefore it will not move thee, sinless, new-washed, and three parts drowned to boot [Hurree Babu has recently saved him from the River], when I call thee a good man - a very good man" (p. 309).

It would, I guess, be an understatement to describe India at the turn of the twentieth century as a patriarchal society, whether on its native or colonial side. But Kipling manages to find a character high in the hills “where women make the love” and pay the compliments (p. 276), the Woman of Shamlegh-under-the-Snow, wife of many husbands and willing to add Kim to the tally. Kim as colonial orphan grew up native until reclaimed by St Xavier’s and now lives as native, by profession, but the woman sees something else in him and speaks eloquently and movingly to it:

“Once, long ago, a Sahib looked on me with favour. Once, long ago, I wore European clothes… I was Ker-lis-ti-an and spoke English. Yes. My Sahib said he would return and wed me - yes, wed me. He went away - I had nursed him when he was sick - but he never returned. Then I saw that the God of the Kerlistians lied, and I went back to my own people….Thy face and thy walk and thy fashion of speech put me in mind of my Sahib….Yes, once I made music on a pianno in the Mission-house at Kotgargh (p. 285).

At parting, Kim’s response to her passionate declarations is to kiss her on the cheek (“practically unknown among Asiatics” p. 287), and to reveal - against all the rules of the Great Game - half the secret of his identity, “Thank you verree much, my dear” (p. 287). The whole chapter - penultimate in the book - is deeply moving.

Kim, for his part, shortly after  makes his own self-understanding clear. Late in the story, the lama says “thou art a Sahib” and Kim rebukes him:

“Thou hast said there is neither black nor white. Why plague me with this talk, Holy One? Let me rub the other foot. It vexes me. I am not a sahib. I am thy chela and my head is heavy on my shoulders” (p. 293).

The dowager Maharanee of Saharunpore is something other. From behind her half-veil she is the life and soul of the party but always alert to everyone’s needs and her capacity to address them. As the bachelor lama acknowledges, “She is a woman with a heart of gold, as thou sayest, but a talker - something of a talker” (p. 294) - and not all the talk is fit to be printed. Kipling towards the end of the book allows himself a small authorial intrusion of intriguing ambiguity. Kim opens a speech thus, “Mother, I owe my life to thee…..Ten thousands blessings upon thy house …” indignantly rejected because she wishes to be thanked as by a son not a priest. Kipling gives the rejection thus: “The house be unblessed! (It is impossible to give exactly the old lady’s word)”  (p. 299). Well, it may seem obvious that unblessed has replaced damned but surely by 1901 only the Reverend Bennetts of this world would have objected. In which case, likely alternatives were indeed impossible to give exactly. On past performance, one has every reason to believe that the Maharanee could swear like a trooper and that is part of her charm. It’s as a feisty woman that she is given a recurrent place in the story. Everyone is going to end up liking her. Patriarchy, no doubt, but the Maharanee’s views on that subject are, of course, impossible to give exactly.

Quest novel;  Comedie Humaine; Bildungsroman; Spy story … all those things and more (the wonder of the te-rain…), though the spying seems more like a device for creating meetings in which the main characters can develop and be developed, Kim first among them. But that would be another review.

Quotations taken from the 2012 Penguin English Library edition, as illustrated at head of review

Posted by Trevor Pateman at 07:18 No comments: