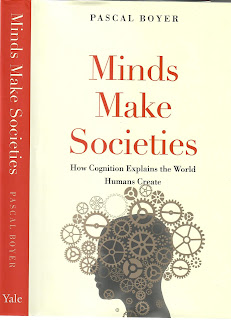 Human beings are born with big brains which grow bigger. The internal structure of those brains is amazingly complex. But there are long traditions in philosophy and social science which suggest that from the perspective of trying to understand how human societies and cultures are possible and why they are as they are, human beings might just as well have sawdust between their ears. Most often, it is simply assumed that human brains are so made as to be plastic to whatever impressions other humans try to implant there - that is at the heart of Locke’s understanding of how humans relate to their world. Children are blank slates onto which anything may be written. That is a position which is also to be found in Wittgenstein.

At a slightly higher level of sophistication or stupidity, according to taste, the twentieth century produced leading psychologists - B F Skinner in the USA and Pavlov in the USSR - who thought that the way to make psychology into a science was to eliminate from its vocabulary the human mind and to study exclusively correlations between visible inputs and visible outputs: the visible reactions of pigeons and rats to the provision of electric shocks or food pellets. The idiocy of this approach culminated in B F Skinner’s Verbal Behavior (1957) which Noam Chomsky savaged in 1959 in one of the great scientific book reviews of the twentieth century: I was surprised to find no mention of it or of Chomsky in Pascal Boyer’s book.

Chomsky can claim to be a main source of inspiration for the kind of approach to culture and society which Boyer introduces and elaborates in this excellent book. But not the only source and the other sources Boyer explains as he goes along.

There has been the inspiration of that neo-Darwinism which makes extensive use of game theory as a powerful theory to think with. This approach dates back at least to John Maynard Smith’s Evolution and the Theory of Games (1982). (Maynard Smith was Professor in the university where I taught, which explains why I made some use of his work in my own 1980s doctorate on Chomskyan linguistics).

Next comes the contribution of what we now call cognitive science which is very happy to study human minds and to do so in close collaboration with those more interested in artificial minds, sharing not just vocabulary but significant theoretical assumptions (about modularity, for example). So no one is now fazed when a theorist writes of human minds computing results.

Finally, benefitting from these theoretical advances, observational developmental psychology has been able to take giant steps in understanding what young children bring to the world in which they find themselves. Wittgenstein once called the babble of the baby “nonsense”; developmental psychologists have called him out, showing how it develops and what it is doing. Likewise, the drawings of young children develop in  reconstructible stages which have a high degree of cross cultural universality and which  - importantly - proceed independently of surrounding visual cultures. Young children may look at adult pictures but they  do not copy them; they have their own ideas about what a picture should look like.

Boyer introduces us to a number of old topics to which (for want of a better shorthand) cognitive anthropology has contributed fresh understanding: tribalism, the madness of crowds, the origins and persistence of religious belief, the family, social justice, and - very interestingly and originally in chapter Six - limits to our own capacity to understand our own cultures and societies. At time, Boyer is able to quote  extensive research support for his arguments; at others, and as he acknowledges, we are still at the hand waving stage - knowing roughly the direction in  which we must travel but not yet having undertaken the journey.

He makes no use of the term meme, though he discusses its limitations towards the end of the book, nor does he use the term learnability which I have found useful: the things which cultures/societies present to new members as things to be learnt can connect more or less well to unlearnt dispositions, intuitions, computational capacities. Thus, there is quite a lot of support for the idea (for example) that atonal music is not learnable as a first music and that, in contrast, we are born adapted to tonal music. Boyer adds  to this an interesting claim that there is an unlearnt ability to improve on a corrupt version of a piece of tonal music - a piece with wrong notes etc.

At the end of his book (pages 272-76) Boyer tries to find a way to exit us from the endless debates about Nature and Culture by claiming that his new paradigm transcends that  folk psychology / folk sociology opposition. I am not convinced his argument succeeds though I can see why it would be politically helpful for it to do so. All of Boyer’s arguments depend on the idea that as a result of very long term neo-Darwinian evolution human beings are born quite well equipped or adapted in specific manners to make sense of and be able to operate in the worlds in which they are most likely to find themselves - there is an unpleasant duty upon researchers to paint the picture of those terrible worlds in which this will not be true. That adaptation helps explain how and why our social and cultural worlds are as they are.

But that idea of pre-adaptation just is a theory of human nature, even though it is primarily a theory about the human mind as something which shows trans-historical and cross-cultural uniformities and has little or nothing to do with blood or bodies or IQ. But the idea, even made that clear, is anathema to the Wittgensteinian cultural apologists, the social constructionists, and the politically correct. They may not (probably will not) understand that the theory is one which is interested in what humans have in common, not what differentiates them. They will just hear the word “Nature” and reach for their guns. Maybe it’s time to face up to the challenge rather than try to make it go away.

Posted by Trevor Pateman at 06:34 No comments: 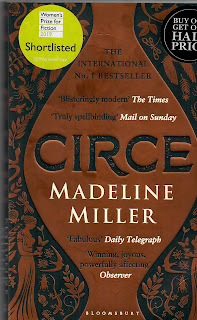 Posted by Trevor Pateman at 01:48 No comments: