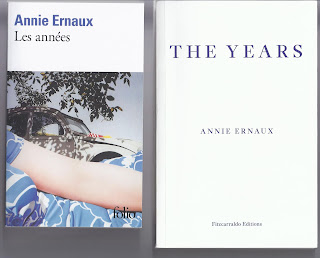 France was (and in many respects, still is) a nation of shopkeepers, and Annie Ernaux was born in 1940 into that very large part of the French petite bourgeoisie which is separated by only a cigarette paper from the paysans and ouvriers. Her parents ran a café and épicerie, her early childhood marked by the everyday wartime and early post-war privations common to nearly everyone. But she is clever and achieves her own upward mobility into the teaching profession and, of course, eventually becomes a famous writer.

This is her autobiography published in 2008 and covering the whole period of her life until then. But the word “I” never occurs, except in occasional extracts from diaries. She writes in the third person (“She”) when directly referencing herself, and at other times uses a generic “We”, and less frequently, a “They”. The reader has surely noticed this before Ernaux draws attention to it and its motivation in the closing pages (page 225 in the English edition). But the English reader will not notice that the translator renders the author’s “On” and “Nous” fairly consistently as “We”, occasionally as "People" except at page 225 where the translated author mentions that she has been using both One and We.

There is a certain amount of slippage, and sometimes I felt that the “We” of this English version sounded unavoidably like the English Royal We, the “We” which Her Majesty uses when talking about herself. This is unfortunate:

And we [translating Nous ], on the threshold of the 1980s, when we would enter our fortieth year, were suffused with a weary sweetness that came of accomplished tradition, and gazed around the table of faces, dark against the light. For a moment, we were struck by the strangeness…” (p 130)

As I read it, this “We” is rather like defensive irony, the voice we often slip into when talking, for example, about the embarrassments of adolescence. Its function is to permit us to talk about things which would otherwise remain unspoken. I think this is how  "She" and“We"  and "They" all function for Ernaux. Specifically, it allows her to write extensively about her own sexuality - the fumblings, the awakenings, the dissatisfactions,the experiments - in a context where she has children and other people close to her who are still alive. The distance of "She" and "We" or "They" provides protective cover; “I” would be too exposing. There is a topic there for a seminar discussion.

But “We” and "They" and "One" are also used because Ernaux is trying to write not only her own story but the history of her times, so that the autobiography is also a biography of a generation:

There is no “I” in what she views as a sort of impersonal autobiography. There is only “one” and “we”, as if now it were her turn to tell the story of the time-before (page 225)

All that the world has impressed upon her and her contemporaries she will use to reconstitute a common time….By retrieving the memory of collective memory in an individual memory, she will capture the lived dimension of History (page 224; see also 169 - 170)

That her experiences are typical of those of a larger group she establishes by means of one primary device, basically the device of assembling proper names. For each  year or decade, she recalls and writes out (often as not much more than lists), the names of currently popular songs, singers, films, TV programmes, household products, shop names, politicians of the moment,  faits divers (murders, crashes, suicides), slogans, catch-phrases and slang. Thus to evoke the varied destinations of the soixante-huitards after the events of 1968, she writes:

Some smoked grass, lived in communes, established themselves as factory workers at Renault, went to Kathmandu, while other spent a week in Tabarka, read Charlie Hebdo, Fluide Glacial, L’Echo des Savanes, Taknonalasanté, Métal Hurlant, La Guele Ouverte, stuck flower decals on their car doors, and in their rooms hung posters of Che and the little girl burned by napalm.They wore Mao suits or ponchos, sat on the floor with cushions, burned incense, went to see the Grand Magic Circus, Last Tango in Paris, and Emmanuelle …. (page 108)

It continues with five more namings and the general stylistic choice of enumeration is sustained for over two hundred pages. I think it poses some problems. Clearly, The Years is not just a work of remembering. People just don’t remember as much as Ernaux does, at least without a prompt. Nowadays, the prompt is provided by the internet. You can simply Google to have your memory jolted: what did we wear in, say, 1970; what films came out that year; what were the slogans on the banners; what word did we most often use to express approval; what were the amusing cinema advertisements [ I have prompted myself there: at the cinema, there was the very sexy advertising for Dim collants, with sing-along music. The ads. were much talked about and it was said that Godard had directed them …].

You can surf for hours and you will be richly rewarded. Ernaux says as much:

The web was the royal road to remembrance of things past [ a double allusion here, to Freud and to Proust ]. Archives and all the old things that we’d never even imagined being able to find again arrived with no delay. Memory became inexhaustible, but the depth of time, its sensation conveyed through the odour and yellowing of paper, bent-back pages, paragraphs underscored in an unknown hand had disappeared. Here we dwelled in the infinite present (pages 209 - 210)

I think this identifies a real problem. The list which results from googling may generate a general nostalgia and often (Ernaux must surely hope) an “Oh, I remember that”. But the feelings evoked are essentially diffuse; they have not been focussed by a single, experiencing self; they were often enough given to you in the infinite present of the computer screen rather than by some inner searching and recovery. So though the lists evoke passing nostalgic thoughts, surely different for each reader, they do not really disturb, and there are simply too many of them. They are not like Proust’s entirely idiosyncratic experience of dipping his biscuit which nonetheless works because it can do duty for something different for each reader. Another seminar.

It’s true, there is a major thread of Ernaux’s book which is about the experiencing self, and which does disturb. That is the thread about her sexuality and I think it is the strongest part of the work, strongly expressed. It is also the part of the work which fitted into my own pre-conception that post-war France was simply Vichy but without the Germans: conservative, Catholic, claustrophobic without liberty or equality, neighbours primed to denounce you.

There is a third possible seminar besides those devoted to distancing pronouns and the lists. The Years ticked off in decades do not on their own provide a strong narrative structure. Of course, there is growing up, settling down, starting again, growing old. But partly because of the wider aspiration to write a collective biography, it doesn’t quite have the force one would get (and expect to get) from an "I" focussed Bildungsroman. Only in the last few pages does Ernaux take centre stage, very effectively so.
*
I bought French and English versions at the same time and decided to read the English one since I thought that in the French there would be too much temporary vocabulary from the past which needed looking up. I consulted the French when I was puzzled or disliked something in the English. I do think that translating “C’est à dire” as “i.e.” is unsatisfactory (page 158) and unnecessary when what is replaced is a colon which could have been retained (page 219). I.e.  just does not belong in literary prose. And I've not come across before the use of "abolishment" for "abolition" (page 136 and elsewhere)

And I think the following translation has to be either a howler or a typo:


Note added 15 April 2020: Ernaux's style could be compared with that of George Perec in Les Choses (1965), translated as Things.