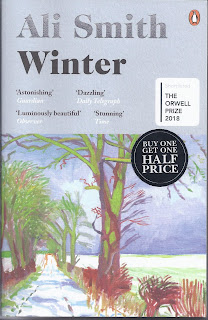 This is one of those books I picked up from the Waterstones table. I knew the name Ali Smith but had not read any of her work; nor did I know anything about her other than that she was well-known (and even then that may merely have been an association created by linking A. Smith to Z. Smith).

So before sitting down to write this review, I thought I should find out a bit about A.Smith. Literally the first thing Wikipedia tells you is that Ali Smith is Ali Smith CBE FRSL – Commander of the Order of the British Empire, Fellow of the Royal Society of Literature. In other words, a subscriber to the curtseying side (as opposed to the bowing and scraping side) of the British Establishment. It will affect how this review turns out, since it was originally conceived in the naïve belief that author and reader were more or less on the same side, unwilling either to curtsey or scrape.

In most respects, Winter is a fine novel, full of wonderful images and startling prose. A large part  could be considered a sustained riff on A Christmas Carol taking us first into Christmas Present, then into Past, and very tentatively into Future. The novel is a four-hander and after an opening nod to Dickens (“God was dead: to begin with” page 3) introduces one of the main characters, Sophia, hallucinating “a disembodied head. It was the head of a child, just a head …” (page 7). I am afraid that from this point on I sustained myself through the folie à deux between Sophia and the head with an image from A Muppet Christmas Carol which boasts an ethereal Spirit of Christmas, a child with a child’s voice, whose business it is to address Scrooge. If anyone in this story is Scrooge, it is Sophia. I may have missed something, but the image in my muppet head helped me through the magical realism passages.

Sophia’s son Arthur (Art) is visiting his mother for Christmas and having split up with Charlotte, the girl-friend he has promised to introduce, employs for a thousand pounds a homeless person, Lux (who I want to call a street urchin but she’s about nineteen), to accompany him as a pretend Charlotte – this enables hints of pantomime comedy. It is Lux who realises that Sophia is in a bad way and persuades Arthur to summons his mother’s estranged sister, Iris, to join the Christmas party. Thus are the actors assembled.

Smith characterises each of them in different and striking ways, partly through flashbacks to Christmas Past. I guess that no one will spontaneously Favourite Sophia or Arthur; after that Likes will split between Iris and Lux. My click goes to Lux, who of course, turns out to be much more than a street urchin. She has bags of empathy, is very funny, and has an excellent knowledge of English Language and Literature, despite being Croatian ( a choice primarily designed to bring in a very Stranger to the story, but secondarily to enable a small riff about Brexit and the insecurity felt by EU citizens in a hostile environment).

Lux has a wonderful set piece at pages 198-99 where she delivers a child’s and then and then and then plot summary of Cymbeline. "Phew! Iris says” at the end of it, to which Lux replies “And that’s only half the story”, which as stand-up comedy would bring the house down.

So, anyway, I’m hearting it for Lux though I know full well that I’m not in with a chance because she’s a lesbian, though that bald fact really plays no part in the story.

Now, the difficult bit. Ali Smith introduces Politics into her novel in a very direct, chunky and wilfully clunky way. Sometimes the narratives are quite general; at other times they are very precise and very local. Sir Nicholas Soames (who he?) gets into the story (pages 89 – 91 where the voice is authorial) as does Theresa May (pages 233 – 34 where the voice is that of Iris). This choice in favour of Politics is discussed, briefly, at pages 317 – 18 where Arthur asks Sophia and Iris for their answers to the question, “What’s the difference between politics and art?” and gets two versions of Keats for an answer.

I am not convinced either by Smith’s handling of her material or by her choices, but even more so now that I discover that Ali Smith CBE FRSL  and I are not on the same side after all. The moment you accept to be a Commander of their Order of their British Empire, you lose your authority to say in a convincing authorial voice some of the things Ali Smith says. That is why authors should always think twice before accepting to wear chains round their necks, they weigh too heavily. I wait to see what happens to Kazuo Ishiguro's prose now that he is both Nobel and Knight.

As for the handling, I can see that the deliberate clunkiness is a way of locating us in that everyday situation where even our best thoughts are distracted by the latest News and sent off in angry or frustrated directions. But I’m still not sure I would do Clunk very often.

As for the content, I think as a general rule one should avoid local bit players. Think of all those countries which have (or had – like Italy in the last century) new Prime Ministers every five minutes, none of whom you or I could name. Theresa May is really in the same league. God may see the meanest sparrow fall, but he isn’t watching Theresa May at all. She’s just another one among many cardboard illustrations of the fact that the Church of England was always a bad idea. The fact that she is probably worse at curtseying than Ali Smith does not tip any balance in Ali Smith's favour.

Posted by Trevor Pateman at 12:46 No comments: 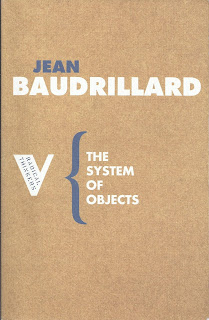 Posted by Trevor Pateman at 00:20 No comments: