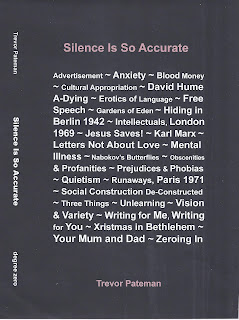 This morning I see that on Amazon  there are copies of my 2017 hardback book of essays Silence Is So Accurate for under a pound.  They are probably review copies which have been passed on. The RRP is £20. I can't compete and suggest you take advantage.
Posted by Trevor Pateman at 03:06 No comments: 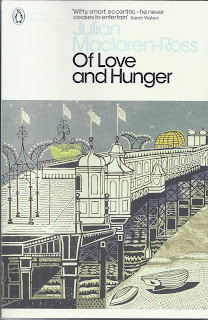 This was a pick from a Waterstones table, almost random but influenced by the fact that it is set on the part of the English south coast where I live. It was originally published in 1947, when the author was thirty five, and was upgraded to a Penguin Modern Classic in 2002 with an introduction by D J Taylor.

I don’t think it really cuts it as a Classic of its kind, though it is entirely within a grim English sea- side resort in the 1930s genre. There’s not much work about, not much money either, even if you have some education and some start in life from your social class but have messed up on that. Got drunk once too often, hit someone, stole something.

Boarding houses provide cheap and exasperating lodging, booze and fags some relief, and there is adultery if you can get it and Maclaren-Ross’s first person narrator does. He’s come back from the East, where he’s messed up, and is down on his uppers flogging vacuum cleaners door to door.

What stops the novel crossing out of its time and place is the style. Even though the narrator Fanshawe is an ex-public schoolboy he writes in a vernacular which, probably inaccurately, I think of as cheeky chappie trilby. Bob’s your uncle, Fanny’s your aunt, Can’t say fairer than that. It could be called telegraphese but telegraphese can be more witty: Telegram enquires How old Cary Grant? Telegram goes back: Old Cary Grant fine, how old you?

Maclaren-Ross is not a humorous writer, more an angry one – though at thirty five I guess he can’t sneak into an angry young man genre. He does write in an open and frank manner; it’s not a Sunday school book and that is a strength. There’s a cast of characters (who segue into Characters) which is really too large but a simple plot which is stuck to. The title's a bit pretentious but I suppose you couldn't call it The Year I Sold Vacuum Cleaners in Bognor Regis.

Not much more to say, really. Not my cup of tea. Time for a walk down to the Pier now. 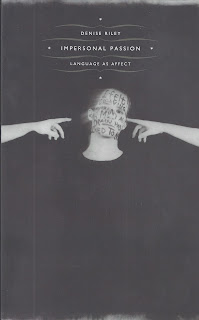 Posted by Trevor Pateman at 11:10 No comments: