My Book of The Year: Svetlana Alexievich, The Unwomanly Face of War

The Financial Times, where I turn to more often than to the TLS or the LRB for Arts & Books news and reviews - the FT is more radical and less modish - invited readers to submit their Book of the Year. I picked Svetlana Alexievich's The Unwomanly Face of War, reviewed here on 5 September 2017 and gave the required hundred word supporting statement which appears today at:


But see the original review for the full supporting case.
Posted by Trevor Pateman at 03:38 No comments:

Review: Ann Jefferson, Genius in France. An Idea and Its Uses 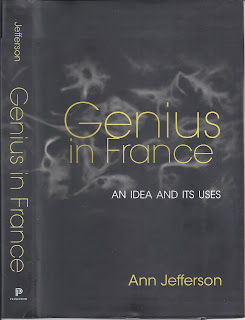 This is a very readable scholarly study, which is more than can be said for some of the works scholared and quoted here. It was only late in the book that I came across books quoted which I thought I might want to read in full. True, I started with a prejudice that the word genius is one of those empty signifiers which gets filled with ever-changing but always vague content and which one should therefore avoid. But Ann Jefferson shows how the term has been filled up in French discourses spanning three centuries and how the content has not been as woolly as I had imagined, but at least passably sophisticated. Nonetheless, it is fairly clear that for most of the time the term circulates in the context of attempts to establish and confirm status and worth, including financial worth. When it comes down to it, the genius of a person or a work is ascribed and confirmed very quickly because authors do not wish to miss a royalty, painters a sale, or critics a chance to burnish their reputations.

In the sciences, the pressure is different: you have to get to the solution before someone else does. You might end up proving Fermat’s last theorem fifty years after someone else has done so, and quite independently, but it doesn’t quite cut it as a stroke of genius.

Likewise, a misunderstood or neglected artistic genius is not quite in the same league as someone who was acclaimed in their own lifetime. Clearly, if you had to wait until after your death, you were deficient in the kinds of marketing skills which Ann Jefferson has occasion to remark upon. Among French geniuses, Victor Hugo seems to have had the clear lead in self-marketing. Jefferson does not re-tell the old story that on the day of Hugo’s funeral you could not find a prostitute anywhere in Paris. That story is clearly somewhere in Parisian memory because when I attended Lacan’s public lectures in 1971 – 72, someone sitting next to me pointed to the front row and told me that the beautiful women there were all paid to attend. So for the next lecture, I joined in the spirit of the thing and wore a boutonnière. One should pay homage to genius, especially when it is hand in glove with charlatanism - a side theme which Jefferson interestingly explores.

But this haste to garland genius is in tension with what is supposed to be an aspect of genius, that the person or work of genius takes us somewhere we have not been before – that is the originality - and it may be quite hard for us to understand where we are being taken or why. The critics may be as baffled as the lay person. Would it not be more likely that we should have to wait for recognition of genius rather than have it announced (as seems quite often the case) even before the show has begun?
Nowadays, for example, a novel is published with the verdict already inscribed on the dust-jacket in half a dozen puffs by the great and  good of literature. What critic would dare dissent?

Genius circulates in a semantic space which includes or has included concepts of creativity, originality, imagination, idiots savants, prodigies, charlatans, madness, intelligence, and Jefferson encounters these as she progresses through her three centuries of French thought. I found her sympathetic chapter on Julia Kristeva one of the most interesting in the book, along with that on Sartre and Barthes, but it does seem to me that Kristeva, at least on Jefferson’s account, is expanding the concept of genius in such a way that it either transforms into or conflates it with singularity which is not so much a mark of originality as a mark of authenticity. If you can find your own genius, you at the same time find how to be authentic, to be you in your own way. That can be an everyday achievement to which all of us can aspire and its pre-requisite is not so much intelligence as  confidence.

Posted by Trevor Pateman at 12:39 No comments: 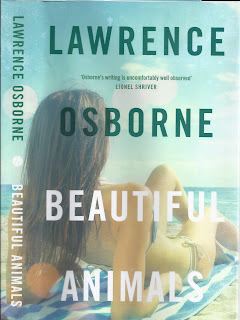 It’s true that most novels nowadays are hostage to their covers, and in this case the novel does little to undo the laziness of a cover which looks like some indifferent A level project. I was surprised because I bought the book on the strength of a puff from Lionel Shriver in The Financial Times. She has an intelligent take on many things so I was hopeful for the novel.

The novel has a plot which is moderately interesting and perhaps more interesting to me because I once knew a rich young woman who thought it would be a good idea to steal the paintings and silverware from her even richer parents’ country home in order to sell them off for a good cause.  Like Naomi - the lead character in this novel - she didn’t go to jail for it because a judge from the same social class decided she was the victim of a manipulative male and gave her a suspended sentence and her accomplice a stiff dose of Parkhurst Jail.

But I felt the writing was lazy. The 294 page book has 24 chapters and I began to feel that, yes, the author gets up in the morning, knocks out a chapter in a couple of hours and then goes off to do something more interesting. When he is short of inspiration, he takes out the road map and makes a paragraph out of getting from A to B.  When the plot threatens to lose all credibility, he props it up with a hasty improvisation. So to make it minimally credible that self-appointed detective Rockhold is able to get on to the trail of Faoud, he throws in an assistant who is a phone call away with all the information he needs, and doubles it up with a miraculous hotline to the Italian police. It is all terribly casual.

I don’t do plot summaries in my reviews but if I did  in this case it wouldn’t take long. It is, I suppose, a strength of the book that it sticks to one story and a small cast of central characters  who may be beautiful animals but are not otherwise terribly attractive or interesting. As philosophers of their own lives, they fail badly, though you could say that is part of Osborne’s point: they may be rich and beautiful but when it comes to thinking, well,  it's been done better. But for Naomi and her friend Amy, it doesn't seem to matter. They have money and don't really need brains. Only Faoud pays a heavy price.
Posted by Trevor Pateman at 06:44 No comments: