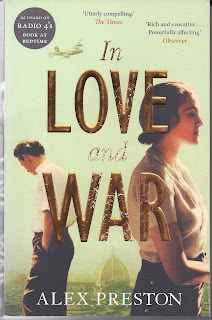 The cynicism of the cover drew my attention to this book on the Waterstones table. We have seen this cover before: it normally targets the person walking into W H Smith to buy the Rothermere paper and a bar of Toblerone and who wants the past – not the distant past, but anywhere between the 1930s and the 1950s (before Suez) when England was posh and glorious and Toblerone was a very special treat. It could have been more cynical: the novel features a dog but we are spared Tatters on the cover. Maybe Faber and Faber drew the line; it cannot be very many years ago that they would have committed suicide rather than commit to a cover like this. It's gold-embossed, in case that's not clear from my scan.

All’s fair in publishing nowadays and, indeed, I bought the book. I looked around for the Toblerone but Waterstones doesn’t stock it yet.

I read the novel and felt ambivalent. I don’t often feel ambivalent – the last time was when I read a copper’s autobiography (Clive Driscoll’s The Pursuit of the Truth) and felt I was being led by an unreliable narrator. With this novel, the cover had primed me to look for cynicism and it is there all over the text if you want to find it, the tropes we are familiar with wheeled on to the page one after another: posh country house England, young chap up at Cambridge, ambivalent sexuality, unwise flirtations with fascism, the woman who reminds him what decency is. For the first hundred pages I was inclined to give up. It all seemed lifeless, the prose even or flat, no anguish and remarkably untroubled passion which I suppose goes with the privilege of being posh. When Preston kills off his first heroine Fiamma at page 110, it doesn’t matter very much.

The novel then becomes more stylistically inventive and gets better but there are relapses. Thus Preston’s leading man, Esmond, recording privately on disc for posterity after the outbreak of War finds a new love and delivers himself of the following thoughts:

If it strikes you as strange, after Philip, after Gerald, that I should love Ada, it shouldn’t. It is not only that Fiamma, dear dead Fiamma, served as a copula, a springboard, a bridge. I have always loved beauty and the gender of those I love matters to me as little as their shoe size. It seems odd to me that so many humans limit themselves, slavishly. For now, it is Ada. (page 201)

It’s true that Esmond does grow up a lot after recording this drivel, but what he records does rather suggest he has done a tick-box degree in Queer Studies where you learn that sex is not acceptable in polite society and must be replaced by gender. But this point of social etiquette dates from the 1980s not the 1930s.  I now felt sorry for Fiamma.

By page 241 Esmond is reading The Communist Manifesto but by this point the dog has entered the story so the reader can feel Esmond must be on the right path notwithstanding. Dogs enter novels at the author’s peril. Milan Kundera does it extremely well in The Unbearable Lightness of Being so it can’t be absolutely wrong.

Thanks to his new love, Ada, Esmond finds himself a fighter in the Italian Resistance and it is the exploits of the resistance which make up much of the text in the latter part of the book.

I made it to the end (page 340) by which time Esmond is horribly but courageously dead and Ada in Auschwitz. I didn’t shed any tears and that may explain why one of the jacket reviews, quoted from GQ, tells us that it’s a book for the beach, “The perfect read to pair with that first sundowner”.  Those who signed off the cover at Faber and Faber presumably had no qualms about that product endorsement. Gin and Auschwitz, anyone?
*

The late Stuart Hood’s Pebbles From My Skull, later reworked as Carlino, is an impressive  memoir of escape from a Prisoner of War camp and a year spent in the Italian Resistance in Tuscany. This seems a good place to recommend it. Hood (1915 – 2011) was what used to be called “a man of the Left” but in the 1940s he was a British military intelligence officer - though one should say, British as in Scottish. Sometime in the 1980s, I discovered he lived in Brighton and got him appointed as a Visiting Fellow at the University of Sussex to contribute to the MA programme I directed. The University was too stupid to recognise his many distinctions and  refused to give him an honorary doctorate for his lifetime work, preferring local notables. Hood’s wartime experience was clearly an ever-present fact of his life, not only in the form of reunions with old comrades (a Piazza is named after him somewhere in Tuscany) but also in doubts and anxieties. I recall walking across the Sussex campus one evening and asking him if his experience still affected his everyday, ordinary life. Yes, he replied, in the evenings I get anxious about where I am going to sleep – his own house and home a couple of miles from where we were walking.
Posted by trevor pateman at 02:29

Email ThisBlogThis!Share to TwitterShare to FacebookShare to Pinterest
Labels: Alex Preston In Love and War, Milan Kundera The Unbearable Lightness of Being, Stuart Hood Carlino, Stuart Hood Pebbles From My Skull