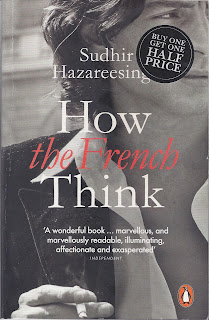 In 1958, aged ten, my father took me on a day trip from Folkestone to Boulogne aboard the Royal Daffodil, one of the ancient ferries which British Railways used for the Channel crossings. You didn’t need a proper passport – a disposable day passport was available cheaply and easily. I found a terrific toy car – a Citroën DS – in a Boulogne shop and on the way back through British Customs kept my hand clamped over it in my raincoat pocket in the belief that it might be an illegal import. It probably was.

Now as someone whose way out of England is still through the Channel crossings, I read the News a bit anxiously as the border between England and France gets harder each day, wondering who will close it first. It was the English who inevitably opted out of Schengen – the word “British” is inaccurate in these matters – but I believe it will be the French who, one way or another, will shut the border completely. They would, wouldn’t they?

There will be lots of people buying Hazareesingh’s book. We would all like to know how the French think because we know that they do think and that this is one of the reasons why they are so difficult to live with unlike the English who don’t think, just get on with life as we have always lived it and intend to continue. We don’t, for example, have to worry about heads of our Ruritanian state – we have them already neatly lined up, hair parted, for the next one hundred years – and increasingly we don’t have to worry about elections: we presently have a government which simply installed itself, promptly telling Parliament that it is now a consultative body like the old Russian Duma.

Hazareesingh’s quite long book is very readable and often amusing. It has two weaknesses. It’s panorama of French thought is quite often not much more than a series of thumbnails. It reminded me in this of Bernard Wasserstein’s On The Eve which I reviewed here a while back. Thumbnails are all right if you are looking for a background briefing but I don’t belong to the class of people who need background briefings on how to deal with the French. The second weakness is its Oxford Common Room geniality. The author has been holed up in Balliol since 1990 and that does not bode well for anyone. At worst, he lets the French off scot-free which may be one reason they have awarded his book one of their big prizes, always a relief to have a foreigner who doesn't trash us.

Hazareesingh’s approach is broadly narrative chronological and it is perhaps this approach which allows the author to avoid anything which you might think of as a confrontation or contestation except in chapter 10 which is more decisive in this respect. What I would like to have seen is more use of the possibilities inherent in the contrast of history and structure – thank you, Lévi-Strauss and Sartre – trying to tease out how the structural awfulness of France today is the product of a history, including an intellectual history. How come the French end up with the paralysed figure of Hollande, who you could see as a sort of tribute act to Brezhnev? How come they end up with so little liberty, so little equality, so little fraternity? Why is it a police state? ( The author never mentions the CRS). Why do the French hate each other so much? Why are they always attracted to authoritarian solutions, left or right? How do they put up with having their lives micromanaged by the state, things closed when you want them open or not allowed to sell what you want, so that the only way to get a plastic bottle of Evian in Paris is to buy it from an illegal street trader?

Why is the history so grubby and still unacknowledged as such – something on which Hazareesingh might have said more than he does. There is a marked contrast with Germany here. Fanon – a fine thinker and writer - gets in, but that’s about it. Why do they still go around denouncing each other? What is this childish rentreé into the trade union strike season all about? Why have they been  so incredibly conservative about everything down to smoking themselves to death, not learning English, being the slowest to adopt modern communications technology and media, thinking it part of les droits du chien to shit everywhere, and so on and so forth? And one which surely ought to have interested the author more, Why do so few – even none – of their universities figure in World Rankings?

I have a suggestion. The author is incredibly well-read to the point where his book sometimes reads like short book reviews strung together. He should take a deep breath, put all that aside, sit down and write an essay setting out just what he thinks about France. He could title it How I think about the French, even write it in French and put it out, a hundred pages long, no more, through a Parisian publisher. He's done the spade-work already.