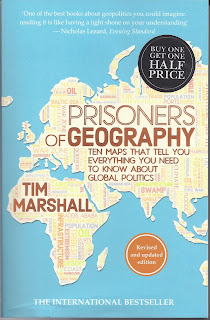 Keep that reservation in mind but do read the book. It's very well done and full of ideas and small asides you will never even have thought of. He does, for example, give an interesting geographical explanation of why the Americans eventually decided to use the H-bomb on Japan though it doesn't explain why they didn't give the Japanese a demonstration of its power on empty land before they used it on real cities. True, that would not have had the shocking power of the real thing and the Americans felt that it was the viciousness of the Japanese military spirit - don't forget their war crimes - which had to be broken.
Posted by trevor pateman at 00:29 1 comment:


In store now at Basil Blackwell, Broad Street, Oxford  and online at www.bookshop.blackwell.co.uk

Also available  at  www.cpibookdelivery.com & www.waterstones.com
Posted by trevor pateman at 11:17 No comments:

Email ThisBlogThis!Share to TwitterShare to FacebookShare to Pinterest
Labels: Materials and Medium - An Aesthetics, Trevor Pateman 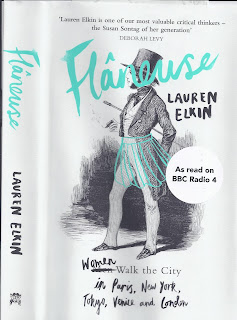 There was a time – and I don’t know when it ended – when if you were self-assured, had the necessary leisure and some ability to write, you could write about pretty much anything which took your fancy, expressing your opinions or sentiments, often in short literary form (the essay), and you would have a decent chance of finding a publisher who would put you into print. You would then become a contributor to the genre of Belles Lettres.

At some point, belles lettres got put under pressure and specifically by professionalised academic writing where it was obligatory to distinguish fact and opinion and, in either case, obligatory to situate what you were saying fully and explicitly in the field of what other people had been saying - and preferably, very recently saying. The footnote and the Bibliography are the outward markers of academic writing - you might even say invented to mark the difference with belles lettres.

Publishers - and I suppose readers too - became wary of belles lettres. What was left from what academic writing had taken over was fiction, poetry and journalism, including the journalism of book reviews. Nowadays, the last bastion of belles lettres is the serious book review or essay in one of the serious Reviews: The New York Review of Books, The London Review of Books, The Financial Times, and so on.

Lauren Elkin situates her book within academic writing by providing copious notes – which I felt under no pressure to read – and a fairly long Bibliography. But the jacket design – very messy, actually – title page and quaint publishing house (Chatto and Windus) situates this as a non-academic book. On the jacket flap we are told it is “Part cultural meander, part memoir” – I am surprised they put it like that because this is tantamount to saying that the book is belles lettres.

And none the worse for that. It’s an interesting read, the short quasi-academic studies spliced with personal narrative and the stage set changing from city to city. The title and sub-title Flâneuse: Women Walk The City in Paris, New York, Tokyo, Venice and London is not misleading but I would bet a bit of money that the author was under some pressure from literary agent and publisher to make it all hang together so that it could Fit into some category – social history or literary representations of the city or sexual discrimination at street level or just autobiography. There are many possibilities, some of which would have led to the writing of a dreadful book, dull and correct and easy to shelve.

I enjoyed reading this book, though she lost me for a moment when late on she mentions keeping a dog in Paris, a dog shit city when I lived there (1971 – 72) and even long after. But I did find her narratives of Parisian history helped me understand how and why I have come to dislike Paris. She narrates the tragedies which today repeat themselves as farce: the ritual demonstrations, the immature bad temper (they were still honking car horns last time I went, albeit less fervently than in the 1970s), and the intense conservatism of the radicals, who think that the past is the model for the future right down to the cigarettes they still smoke. If you think Ruritania is stuck, try France - a country haunted by a collective memory of which several parts still have to be denied. Empire and Collaboration for starters.

I think the weakness of the book is that Elkin does not quite know what she stands for. On occasion, she expresses a forceful opinion or cracks a telling joke but much of the time she muses, a bit ironic, a bit fey. I made a mental contrast with Katie Roiphe. She should strike out a bit more, strut her stuff rather than stroll it .
Posted by trevor pateman at 02:02 No comments: