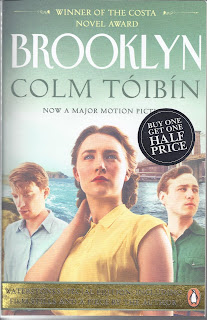 I haven’t seen the film. Good films are often based on short or indifferent literary texts, but which have the potential to be transformed by cinematic treatment. Crowd scenes, dance hall scenes, tense dinner table settings, desolate graveyards, departing passenger liners, are all things which can be magicked by film and this book contains all of those.

As for the book itself, my paperback copy carries 15 major review endorsements of the literary text. I am unnerved. I am clearly missing something. For I found the writing flat to the point of banality and the narrative without effective pacing. I nearly gave up around page 100 but then the book does pick up and I made it to the end. Nonetheless, at no point did I find myself moved by what could be a moving story. Instead, I felt the story was being neatly and sometimes tritely packaged, with some heavy-handed labelling to make sure that we don’t miss the point, that Eilis is digging a hole for herself etc.

Let me give one example from a stage of the book where I was struggling to keep going, from page 89:

By the time they were removing the trifle dishes, the hall was a mass of smoke and animated talk. Men sat in groups with one or two standing behind them; others moved from group to group, some with bottles of whiskey in brown paper bags that they passed around….. Eilis thought, as she sat down with a glass of sherry in her hand, that it could have been a parish hall anywhere in Ireland on the night of a concert or a wedding …

This reads like a set of instructions for creating a film scene; and it tells rather than shows. There is nothing here to make us feel the animated talk; we just know it is supposed to be out there somewhere.

But all those 15 critics, including some heavyweights, can’t be wrong.
Posted by trevor pateman at 05:32