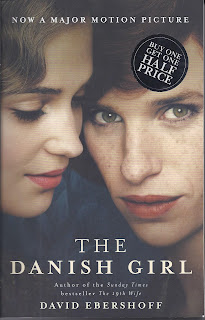 I haven't seen the film but I skimmed a couple of reviews and, as a result, picked up the novel - originally published in 2000 - from the prominent table display in my local bookshop. Not so long ago they had Harper Lee's Go Set a Watchman on prominent display. I fell for that too.

I expected an interesting and maybe provocative read but this 310 page novel is, for the most part, lifeless. There came a point at page 72 when I read the opening paragraph of Chapter Eight and then read it again in case I had missed something. I hadn't; the paragraph was simply deadly dull:

For their August holiday, Greta and Einar returned, as they did every summer, to Menton, a French harbour town on the border of Italy. After the long summer Greta said goodbye to Copenhagen with a sense of relief. As their train rattled south and over the Maritime Alps, she felt as if she was leaving something behind

There was an awful lot more like that still to come. At times, it felt as if a rather thin story was being padded out with travelogues and (albeit carefully researched) city descriptions.

As for the main story, the transition of  Greta's husband Einar into a woman, Lili, accomplished in a context of great wealth and supportive supporting characters, it is told in an emotionally restrained and sexually prudish manner which makes the whole thing come across as if written to reassure a reader of nervous disposition. It is polite, middle class creative writing class writing. On original publication, long before transgender themes became fashionable, it found favour with right-wing English newspapers, the Church & Queen Sunday Telegraph, for example saying


David Ebershoff manages to avoid any hint of prurience or pornography. Instead he has written an engrossing story of true love, suffering and sacrifice

Since the novel trades off a Real Life story, it would be legitimate to ask if the novel Ebershoff has written does actually engage with what really happened, but I haven't done the research to pursue that and mention only one feature of the true story below.

So sticking to the novel, I can only say that I found it "engrossing" only in occasional passages where the author is writing about relationships other than the one between Greta and Einar / Lili. Notably, there is a long passage about Greta's  relationship with her first husband at pages 185 - 93 which shows that Ebershoff can do better than he does through much of this book.

Nor did I feel that I was being led to understand more about Lili's predicament. Ebershoff eventually classes her for us as a hermaphrodite ( or inter-sex person) who has external male genitalia but internal organs which include ovaries. But the narrative is mainly concerned with a long pre-history of cross dressing and "passing for female" which precedes Einar's decision to undergo reconstructive surgery and that pre-history involves very little to alter the heart rate either of the main characters or of the reader. I just have a feeling that sheer plausibility requires that it should be at least a little, shall we say, fraught.

Ebershoff draws a discreet veil over the outcome of the surgery. Lili's fourth operation killed her. In 1931 at the age of 49, she underwent an untested procedure to transplant ovaries or a uterus into her. It didn't work and she died. I will do some more research, I am sure. My first impression is that she may have been as much a victim of irresponsible medical experiment as an icon for full transitioning.

Posted by trevor pateman at 02:36 No comments: