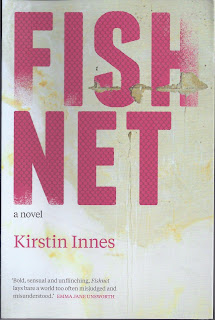 Posted by trevor pateman at 11:55 No comments: 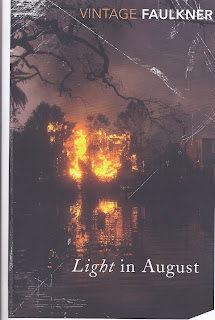 Light in August was published in 1932, just twenty years before Harper Lee began writing. In comparison to her books, it's a heavyweight work of literature, initially striking me for its wordplay linguistic inventiveness and its piledup evocative paragraphs. It also struck me for its sexual frankness. It's a slow read because Faulkner is in no hurry and does not maintain a single (or even a dual) narrative line. I found this unsatisfactory only at the end when the introduction of a completely new character, the State Captain Grimm - Joe Christmas's eventual killer - delays the work which is then delayed again by the historical musings of Hightower.

On those Lists which are everywhere, it ranks in the Top 100 American novels of the 20th century and no doubt even higher among novels which treat of the American South and the legacy of the Civil War, whites and negroes, Confederates and Yankee abolitionists. But its themes are in many respects more personal than sociological, focussing on a set of lives early damaged and badly so and intersecting in ways which bring out that damagedness. There is only the merest hint of the possibility of redemption, in the short final chapter.

It's 380 pages in my edition; I doubt I will read it again, even though it is the kind of richly-textured book which would repay a second reading.
Posted by trevor pateman at 01:19 No comments: 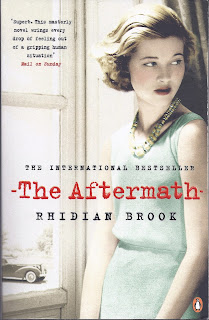 Germany in the immediate aftermath of World War Two is a popular setting for contemporary novels written in English. On this site, I have recently reviewed two others: Joseph Kanon's The Good German and Ben Fergusson's The Spring of Kasper Meier. This book is another one. There must be others and already enough for a Compare and Contrast MA dissertation.

I began with a prejudice against this book. The author is described as a "regular contributor" to BBC's radio "Thought for the Day" which in the days when I listened to radio was an Establishment platform for unctuous religiosity. Oh dear, I thought, I hope that's not what I'm in for with this novel.

Fortunately, I wasn't, though my suspicions returned when I got to the last of the author's "Acknowledgments". All novelists have to have these nowadays - younger writers think it means providing a list of their Likes - and Rhidian Brook ends his own with an acknowledgment to "The Author of All Things".

The novel maintains a well-structured pace and I didn't at any point want to give up on it. The pace quickens at the end but the end itself could be found unsatisfactory: Brook resolves the situation of  his main German characters, Stefan Lubert and his daughter Frieda but not that of his main English characters, Lewis, Rachael and their son Edmund who have been living in the requisitioned Lubert villa. It's left for us to imagine the outcome for them but it is such a big task that it feels like it's been dumped on the reader.

The strength of the novel is in the feeling of edginess which Brook creates in handling the relations between his main characters. Lewis-Rachael, Rachael - Lubert, Edmund-Frieda, Lewis-his colleagues, Edmund and the street orphans of Hamburg. You can imagine it done as a stage play with silences and exits.

All the characters are dealing with loss and it is their different responses to loss which the novel explores. The ending simply restores one of the losses, quite literally: Lubert's wife and Freida's mother, who they have believed dead in the 1943 Hamburg firestorm, turns out to be alive.

There are moments of unctuousness but his German orphans are constructed around their knowledge of English swearing, definitely not acquired from Thought for the Day.

Posted by trevor pateman at 00:23 No comments: 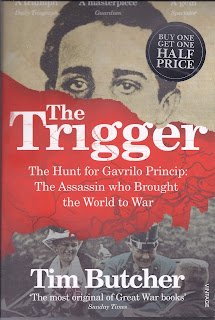 This is a beautifully crafted and very readable book. The author retraced - literally, as a hiker - the steps which took Gavrilo Princip from his home village in Austro-Hungarian Bosnia to Sarajevo and the intellectual and emotional steps which turned him into the assassin  of the Archduke Franz Ferdinand in 1914. Narrating his journey, he at the same time writes the biography of Princip and compares and contrasts the Balkans in the 1910s with the Balkans in the 1990s, where he worked as a news reporter. There is some original archival research done on the way. In total, it's a very good book.

Tim Butcher presents Princip as a South Slav nationalist - a Yugo-slav nationalist - rather than a Serbian nationalist. He wanted to free all those who were colonial subjects of the Austro-Hungarian empire regardless of their language or religion. Princip was actually (it seems) little interested in how they would then organise themselves.

These claims are important because the rhetorical positioning of the great powers in the run-up to their  First World War cast Princip as a Serb Nationalist in pursuit of what later came to be called Greater Serbia. That positioning allowed Austria-Hungary to point the finger of blame for the assassination at independent (but weak) Serbia and pushed Russia into the role of defender of Serbia, a country populated by fellow Orthodox Christian Slavs.

This is once again one of those fine books which though not written by an academic will force the academics to re-think.

Criticisms occurred to me at just a couple of points. Butcher makes rather heavy weather of the language issue - is it Serbo-Croat, or Serbian and Croat? - and strangely makes no mention at all of the fact that the south Slavs use two alphabets. Serbians / Orthodox Christians use Cyrillic; the others use Roman. Yugoslavia, when it existed, was obliged to use both.

Butcher's narrative is about Serbs, Croats and Bosnians (and Herzgovinans - Princip was one). The Slovenes, the Macedonians, the quasi-independent Montenegrins, the Kosovar Albanians, the Jews, the Hungarians, the Roma don't figure. What united them all was merely the fact that for centuries they had been ruled as colonial subjects either of the Ottomans or the Habsburgs. Princip did in fact succeed in freeing all of them from the yoke of those Imperialisms. The brutal conflicts of the 1990s were (at least partly) about freeing themselves from the yoke of a demented Greater Serb nationalism.

Posted by trevor pateman at 00:30 No comments: