Review: Andrew Morton, 17 Carnations: the Windsors, the Nazis and the Cover-Up 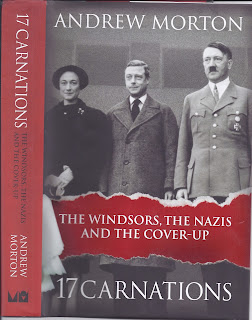 This is what you end up with if you place at the heart of your country’s constitution a struggling dysfunctional family, often enough just not up to the job or any job. There are plenty of occasions reading Andrew Morton’s book when I thought “Just like Prince Charles!” and “Just like Prince Harry”. The Windsors ( and their previous incarnation, the Saxe Coburg Gothas whose name they dropped in 1917 ) have only ever had much luck when their women have been in charge: Victoria, George VI’s wife Elizabeth Bowes-Lyon (the Queen Mother), Elizabeth II.

Unfortunately, this is not a good book. I find it hard to believe that the author read it cover to cover before signing it off:  two thirds of the way through, it is as if another (and inferior) writer takes over in Chapter 13 who then goes on to re-tell from a different perspective what has already been told in the first dozen chapters (and already more than once). So though I began reading with interest I ended up more than ready to put the book down.

It is not original research and in offering many quotations from a fair number of historians who have already written about Edward VIIIs sympathy for Hitler (and his own German aristocratic relatives who rallied to Hitler’s cause) it ends up without a clear verdict on the nature of his disloyalty to his country and his country’s various governments in the 1930s and 1940s. Morton has at least one excuse: though many important incriminating documents survive, others have surely been destroyed and more would have been if the House of Windsor and the Governments of the 1940s had had their way. (Just as nowadays, it is the Government which is fighting to keep Prince Charles' indiscreet political letters from becoming public)

The man who briefly became Edward VIII before abdicating to marry an American divorcee combined popular charisma with a deeply unpleasant private personality, his wife likewise. There are many examples in the book to make you think, “These people are complete shits”.

Like Prince Charles, Edward believed in an “active” monarchy which would not restrict itself to the constitutional duties of advising, encouraging and warning. But it’s unclear on what Edward felt his right to intervene to be based: he doesn’t appear to have studied much, read much or spent much time talking to anyone who wasn’t a crony or a crook – or a flatterer and spy. Perhaps then just Divine Right gave him the authority he assumed, after the Abdication, to conduct protracted freelance diplomacy with the Nazis and their allies.

Deeply self-centred and often childish, he had no notion of discretion and his careless talk in France in 1940 – where he had an active duty military posting - may have cost lives. On that Morton is reasonably decisive.That may have been one reason he was then posted to the Bahamas where he was made to sit out the war as Governor. Primarily, he was exiled from Europe to keep him a long way away from his Nazi chums.

The insecure George VI and the vindictive Queen Mary (George V's widow and Edward's mother) and Queen Elizabeth, later the Queen Mother ensured that after the war, there was no place for him in Britain. But in perpetuating the family feud as dysfunctional families are supposed to do, they may have done some good. Edward VIII got away with actions which in the case of lesser mortals might have led to war-time internment. He does not even appear to have been questioned under caution. After the war, he had little or no scope for any action.
Posted by trevor pateman at 08:45

Email ThisBlogThis!Share to TwitterShare to FacebookShare to Pinterest
Labels: Andrew Morton 17 Carnations, Andrew Morton The Windsors the Nazis and the Cover-Up